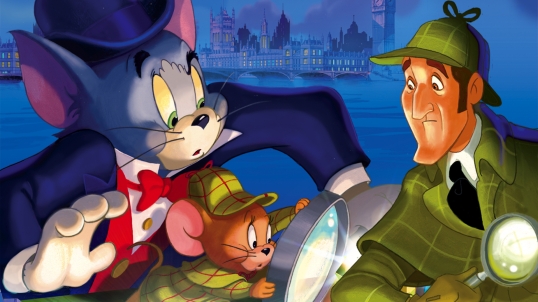 With “Sherlock Gnomes” coming out next month, let’s check out another crossover for the British sleuth, with “Tom and Jerry Meet Sherlock Holmes”. In this film, Tom and Jerry must help Sherlock & Watson uncover the mystery of some stolen jewels.

Sadly, this is yet another “Tom and Jerry” movie where they’re thrust into someone else’s story, but don’t interact that much with said narrative’s protagonist, and go off to do their own thing instead. Tuffy also yet again steps in to serve as their annoying guide and be a translator for these quiet characters. 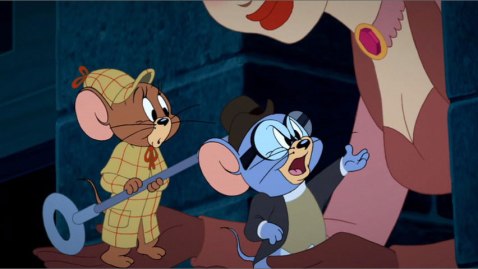 What could have been an adventure that pairs Sherlock & Watson with Tom & Jerry, ends up being two divided movies that are struggling to mesh into a smooth collaboration. What’s the point of having a film about these characters meeting, when they only spend the beginning and end together? The whole gimmick of a crossover is seeing characters from other works interacting with one another.

When the cat and mouse DO share a scene with Sherlock, they’re usually doing their own slapstick nonsense at the side or in the background. I had to sometimes rewind the film, because the camera was pointing at Tom & Jerry screwing around, while important dialogue was being delivered offscreen. That’s like filmmaking 101, make sure the camera’s focus is on what’s important for the audience! 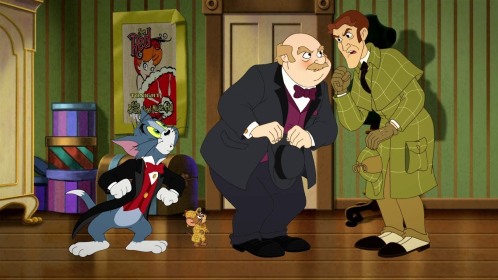 Sure, Jerry does a bit of detective work, which I appreciate, but Tom meanwhile just gets himself abused by his own clumsiness or Jerry’s cruelty. This is the problem with forcing the Tom & Jerry blueprint into Sherlock’s universe, how do the writers stay faithful to the Cat & Mouse slapstick formula AND tell an engaging mystery? These are drastically different intentions that clash messily, making for a very irritating film experience.

So much of the film is padded out with long winded chase scenes or obnoxiously desperate physical comedy. Yeah, there’s an investigation going on, but the film also always feels the need to find any excuses for comedic violence; even if it ends up making a scene feel grating, kills tension, wastes time, or takes away the central focus.

Yes, a big part of the “Tom & Jerry” dynamic is the slapstick, but A) This Physical comedy has none of the timing or wit of the original shorts, it’s just relentless forced pratfalls B) The film is ALSO trying to tell a coherent story, one that doesn’t necessarily need contrived slapstick every 30 seconds. 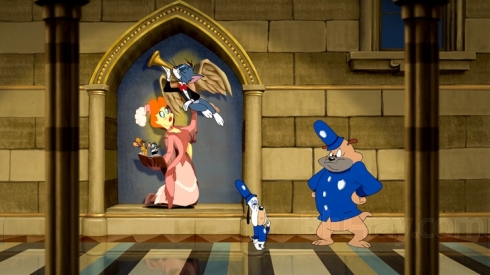 Even when we cut to Sherlock’s side of things, the storytelling doesn’t get any better. Sherlock is portrayed as a perfect flawless detective who immediately works things out after a microsecond, while Watson just bumbles along cluelessly at his side. Although, these scenes are more watchable than Tom & Jerry’s, as we get to hear Michael York’s elegant voice as Sherlock and the always charming John Rhys-Davies as Watson.

Besides the impressive voice cast, I did also like the steampunk technology being used by our villains. Diamonds are stolen with nifty bronze contraptions, plus the finale features Sherlock excitingly taking on the antagonist’s steam powered carriage. This Steampunk aesthetic did add a little cool style to the villains, and brought some much needed personality to what’s essentially a cash grab on two famous franchises. 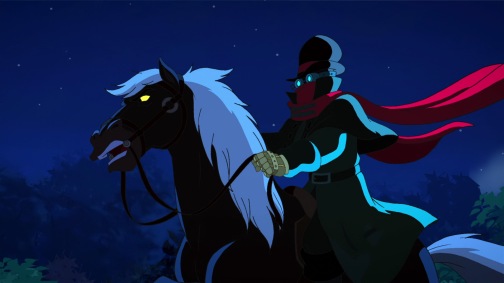 The Animation is inconsistent in quality, ranging from surprisingly fluid for a straight to video production to pretty cheap looking movement. It’s a shame that the animation isn’t polished all the way through, because the movie can look very good when the work shows. If you couldn’t afford to make the whole film fluid and refined, then why bother? The random changes in quality are way more distracting than a movie that looks cheap all the way through.

Fans of MGM cartoons will also have fun spotting cameos from the likes of Spike, Red, Butch Dog, Wolf, and Droopy; many of which have their own parts to play in the story. Personally, while I am a fan of these characters, I feel like the film gave them too much attention, leading to a 50 minute film being overstuffed with too many character plotlines. 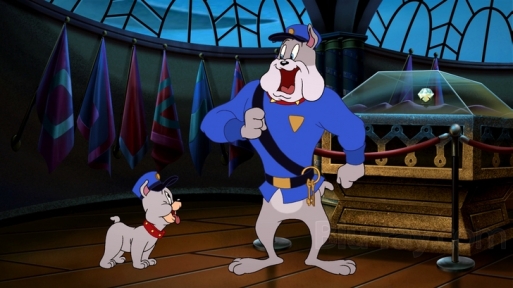 Isn’t this supposed to be Tom & Jerry’s movie? Why give these supporting characters their own screen time stealing narratives? The film is short enough as it is! My guess is that the filmmakers wanted to fill up the 50 minutes some how, because they felt creatively stifled by the crossover gimmick; maybe I’m wrong, but it’s the impression I got while watching the movie. 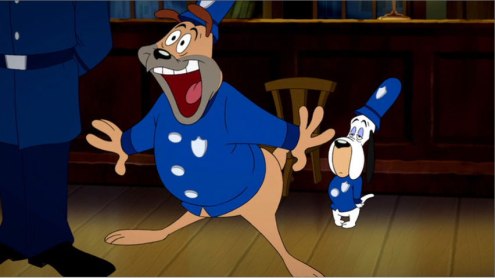 Not to mention, their inclusion in the Sherlock universe didn’t blend very well. We go from a smooth talking detective grounded in reality, to a bunch of cartoony animals who like casually bashing each other. It just doesn’t click with me personally, and I think this because the film doesn’t seem that interested in any kind of world building.

To conclude, “Tom and Jerry Meet Sherlock Holmes” was a rather boring slog to me. Sure, it has a star studded cast and some neat steampunk inventions, but it’s a tediously dull mess as a whole. I felt very sleepy while watching this film, because it’s heart isn’t in the right place, and the filmmakers clearly struggled to make these radically contrasting worlds cross over.

Really, I think a better direction would have been to have Jerry as a detective uncovering a crime committed by Tom! That’d remain true to the spirit of the cartoons, while also giving a chance for the duo to roleplay as Arthur Conan Doyle style characters.

Alas, Warner Bros. clearly wanted to just simply cash in on recognisable classic characters, even if the finished film would end being a load of chaotic clutter. Slap “Tom & Jerry” and “Sherlock Holmes” on the cover, then BAM, people will eat it up off supermarket shelves. Who cares about making a good solid movie? Right? The easy path takes less effort or risk *Sigh*.

Posted on February 26, 2018, in Uncategorized. Bookmark the permalink. 9 Comments.