Keep in mind, these choices are mainly based on design, nostalgic memories, or concept, NOT gameplay mechanics; as I’ve not played Red & Blue in years.

Also, this list is based on my own tastes, and doesn’t serve as the definitive countdown. Let’s begin!

There’s something kind of sad about Weezing to me. Two conjoined heads with gloomy expressions, casually puffing toxic gas… it’s almost like it’s very existence is tragically uncomfortable. I kind of want to cuddle it better, and let it feel loved as a potential trainer for it. I don’t simply like Weezing out of pity though, I do think there’s something cool about it’s deadly looking design! And I like those little craters on it’s surface, very neat. 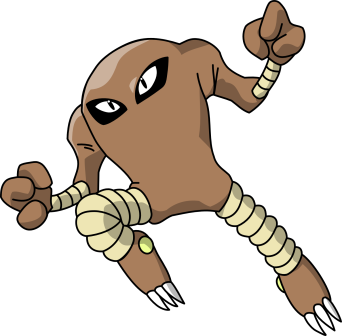 One thing about me, is that I LOVE Bruce Lee! So a Pokemon named after one of my heroes is bound to win me over haha. Yes, it’s original Japanese name Sawamular was inspired by the world’s first kickboxer Tadashi Sawamura, but the English name is the one I grew up with (Cue an army of angry sub purists telling me off for this logic).

However, I don’t like him JUST because of it’s name! Pfft, what do you take me for? I find it cool that it’s nose & mouth are shrouded away like a Ninja’s mask is covering it’s face, I adore those ribbed limbs that look like they can stretch for attacks, I love how mysterious it’s eyes look, and I reckon it’s kind of cute how it’s face is squashed into it’s torso haha. He just looks super badass, and deserves to be named after the founder of Jeet Kune Do. 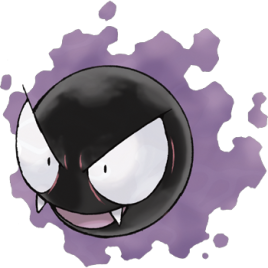 So, I REALLY like Ghost Pokemon, as someone who is both fascinated and unsettled by the concept of the paranormal. Ghastly is one of my favourites for sure! And it’s anime episode from the Indigo League is a strong memory of mine. A BIG part of his appeal, has to be the voice it’s given in the 4Kids dub, this eerie but goofy whisper that’s fun to imitate.

But I also like that cheeky look on it’s face, it amusingly implies that he’s up to something naughty, but nothing too malicious. Also, it’s bowling bowl shape is nicely drawn, makes me feel like he feels smooth to stroke or pet haha. Not to mention, that eeries purple mist that glows from him is both spooky and kind of pretty at the same time.

I’ve always been particularly fond of Mr. Mime, looking wonderfully weird but appealingly friendly too. That clown-like design adds a quirky charm to it’s appearance, from it’s wacky hair to it’s curled toes. Oh and gosh do I love it’s “Gloves”, amphibian-esque hands that look like they can pack quite the slap haha! Also, in the anime, I remember that Mr. Mime was a silly, lanky, neurotic, and sensitive Pokemon; traits that really resonate with my own personality & physique.

Oh how I love Porygon. Inspired by the Polygon mesh structure in CGI models, Porygon is a Pokemon who can awesomely transform it’s surface & body into ANYTHING. While Ditto is limited to copying other Pokemon, Porygon can morph into a space unicorn dragon. It is empowered by it’s very own imagination, and I can really connect with that as a creative myself.

It has an angular abstract design and bubblegum colours, which make it uniquely pop out from the wide catalog of Pokemon out there. I really like how refined it’s lines are too, as if it’s been carved with well calculated perfection in mind. Also, as an animation fan, how can I not warm up to it’s similarities to 3D CGI? Porygon isn’t just my favourite Gen 1 Pokemon, it’s my favourite Pokemon I’ve ever seen haha!

So, those are my top 5 favourite Pokemon from generation 1, what are yours?

Posted on February 27, 2018, in Uncategorized. Bookmark the permalink. 2 Comments.