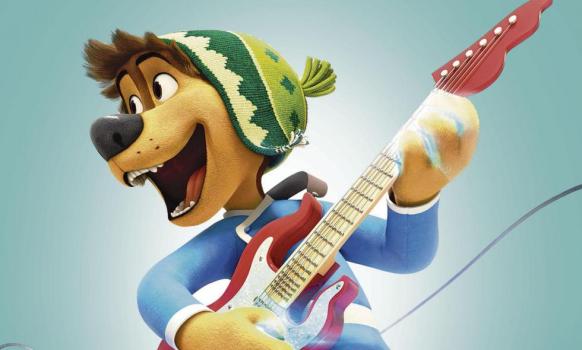 “Rock Dog” is a Chinese-American animated movie, from “Toy Story 2” co-director Ash Brannon. In this film, we meet a bouncy Tibetan Mastiff called Bodi, who discovers a passion for music, but his father insists that he sticks to protecting their village of sheep, using their ancient magical fire powers as defence.

After being convinced by a local, Bodi’s father lets Bodi head off to the city to achieve his dreams, where he meets his musician hero Angus Scattergood, and the creatively bankrupt rockstar decides to exploit the naive Mastiff’s talents for his new song.

You can really tell, that this is a production where Western and Asian production companies tried to heavily compromise both of their marketing angles, because wow, this is a messy hodge podge of colliding creative directions, and no one seems confident about what the film’s overall identity is supposed to be.

Imagine if you took “Kung Fu Panda”, squashed it with “This is Spinal Tap”, stole antagonists from a gangster movie, threw in lots of rockstar movie cliches in there, and presto! You have “Rock Dog”. Yep, it’s a weird combination of ideas, yet it’s also underwhelmingly generic at the same time. It’s an odd experience, but that’s what happens when you try to blend random formulas together, you get a big dose of “Um… What?”

All the conventions of this genre are here, from the disapproving traditional parent who hates Rock N’ Roll, to the far from shocking highlight of how the music industry can be exploitative. The Story is about as predictable as these kinds of films come, but the addition of magical martial artist dogs adds a strange spice to our expectations, and is bound to make audiences scratch their heads.

In spite of how bafflingly awkward this merging of radically different elements comes off, there’s something about this film that made it somewhat watchable, not completely engrossing, but at least okay to sit through, and I would even say that it’s got it’s own charms.

I think what holds this film together, is Bodi, as there’s something rather endearing about his personality; he’s quite dopey, but he’s full of innocent naive optimism, and a sweet love for those around him. While I wouldn’t blame people for not liking him, as he can be annoyingly reckless sometimes, I personally found some appeal to his character traits, because they really resemble how a dog WOULD act if humanized.

But I also really liked the sheep of the snow mountain village, they can be understandably terrified of the wolves, but they always seem to find it easy to recover from each attack, and there’s something admirable about that. They always have smiles on their faces, act a bit goofy, but they rarely try TOO hard to get a laugh, and I honestly thought they were very cute.

I also appreciated how this film goes into informative detail about how a recording a professional song works, from the frustrating re-writes of lyrics, to the complex stages of production. Nothing seems romanticized, everything is shown in honest detail, and I bet musicians in the audience would appreciate this, because it helps educate people about the work that goes into recording expert songs.

The Villains, who maybe the predictable choice of wolves, can be pretty funny; like how the leader is petty enough to demand a colour coordinated phone, plus the dynamic between a smart henchman who tries hard to impress his boss, and his childishly useless partner he’s stuck with. While I didn’t find them to be as funny as the wolves in “Storks”, they still managed to get some laughs out of me as comedic antagonists. 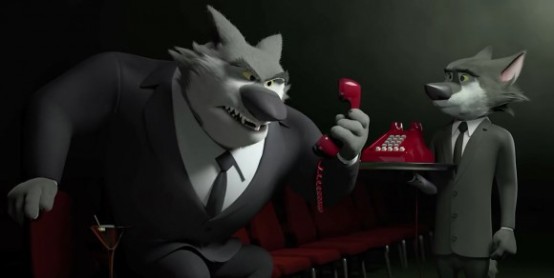 I also like how the tension between Bodi and his father doesn’t drag on for the whole movie, his father actually becomes more open minded at the right time, neither too early or too late. Of course, he’s not entirely convinced, but it’s a step forward, and making room for more development of his character.

So, that’s a lot of things to compliment, right? Well, this is still a movie with faults, a flawed motion picture that makes me see why it didn’t become a smash hit, and I’m not shocked that it was a huge box office flop. It’s not entirely bad, as I’ve provided a surprising amount of positives for it, but man does it teeter on the edge of being awful.

It’s not just the generic storyline, this can be a pretty obnoxious film at times, because the comedy is capable of thinking that over the top slapstick is instant comedy gold, and that overdoing a gag is the best approach to achieving a laugh. There’s many jokes that embarrassingly overdo their payoffs, to the point where it becomes grating, and you can tell the filmmakers are lacking in any sense of restraint or timing.

Not only that, this is also a very dreary plot to follow, as we’re basically watching an asshole rockstar exploiting a naive fan, which is far from charming entertainment, and actually quite mean spirited. Yes, this is supposed to be a way to teach Bodi to become less naive about the world outside his village, but it just comes off as an unnecessarily long and malicious lesson for our hero.

We know what Angus is up to, we can see that poor Bodi is being used, the eventual payoff is insultingly blatant, and yet this farce takes up the whole film’s middle act. Angus is just a horrible irredeemable character, who spitefully patronises and abuses Bodi, knowing full well that the dog means no harm. Where’s the joke? Why should we care that Angus finishes his song? What’s the point?!

Yes, Angus later feels bad about what he’s done, and does try to make up for his awful actions. But like I’ve said many times before, I can’t believe a character’s development if it happens as the film arrives at it’s climax, while they behave atrociously for the rest of the film.

Angus doesn’t change or grow through personal experience in the narrative, never demonstrates a softer side, and only exhibits empathy once he feels guilt tripped by his butler. This is NOT how to write a the arc of a jerk’s redemption, it’s lazy last minute character building, which I can’t get behind as an audience, because it comes right out of nowhere.

While there are lots of decent recognisable rock songs in the soundtrack for montages or sequences, the original songs our characters come up with are very uninspired, and I fail to believe that Bodi’s bland music talents are powerful enough to trigger his inner fire. It’s unintentionally funny, watching a character strum mediocre folksy riffs on an acoustic guitar, while fancy special effects imply that his skills are dramatically intense.

Why couldn’t his rock music be truly mind blowing? What was stopping the filmmakers from giving him an awesome electric guitar to shred on? They already let Angus pull off this kind of music, and Bodi clearly wants to emulate that style! Baffles me, it really does, and the end result reflects how underwhelmingly generic this film can be.

To Conclude, “Rock Dog” is extremely unremarkable, and tries to awkwardly combine ideas that aren’t meant to blend, but there’s some things here and there worth praising; like our adorable lead hero, and some mildly funny moments. It’s fiercely flawed and mediocre, but I wouldn’t complain if I had to watch it again. Give it a chance if the concept tickles your fancy, but I wouldn’t say that you’ll be missing out on anything if you skipped it.

Posted on March 18, 2018, in Uncategorized. Bookmark the permalink. 4 Comments.