Wealthy tycoon Sly Baron is letting the public venture on his extravagant space ship, inviting experienced astronauts, celebrities, and contest winners Mystery Inc. Once in space, the ship starts breaking down, and everyone ends up staying in a resort on the moon. However, things get spooky, when the crew suspect that an alien is behind the spaceship’s malfunctioning!

This film opens up a bit too fast, diving straight into the space launch after the opening titles, skipping over the contest or training, and expecting everyone to just jump in to the story from this point. Then, when the film gets going, the pacing suddenly slows down, and we’re given filler & banter between the crew as we wait for alien attacks to happen. This sloppy pacing makes the narrative feel like it’s an episode of the show that’s been stretched into a feature, mainly because it fails to prove that it has enough material to carry an 80 minute production.

I had a mixed reaction to this film’s comedy, as it’s like it bounces up and down in quality as it goes along. It’s sometimes painfully bad, often either hanging too long on an awkward pause for laughs, or repeating the same stale gags again and again. Yet, in spite of this, the film still got a big chuckle out of me at points, thanks to it’s hilarious quirky supporting characters; like the deluded alien hunter Ridley, singing football star Uboat,  gruff spacemen Colt & Zip, and bonkers scientist Hudson. Sure, some of the other supporting characters were flat, like an annoying sleazy news reporter, the self absorbed Sly Baron who has the single gag of being vain, and a robot with the one joke that he’s not funny, but I did laugh loudly at the others. 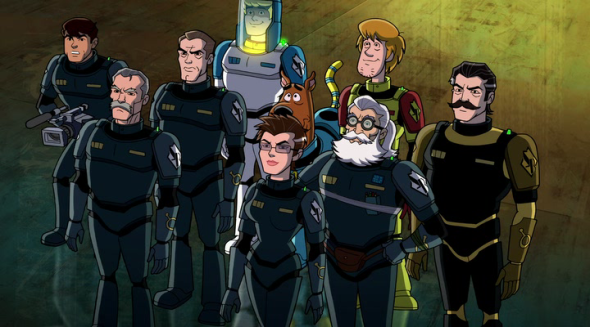 Mystery Inc themselves are a mixed bag, Shaggy and Scooby are their usual goofy lovable selves, and even surprisingly play immensely active roles in the final climax, but the others? Velma is constantly bitter about Daphne scoring higher than her on the training test (although, this does shed a sympathetic light on her later on), Daphne is portrayed as an obnoxious valley girl who won’t shut up about her hair (yet the film guilts Velma for underestimating Daphne’s intelligence, kidding me?), and Fred is at his most insufferable as an idiotic fanboy gushing over the famous astronauts. Sure, I loved Shag and Scoobs eating food or having fun on the moon, but I couldn’t stand spending time with the others, and didn’t find their one joke character subplots to be funny in the slightest.

The best thing about Moon Monster Madness though? Even though it has little to work with from the script, there’s a great cinematic presentation for the film; giving us lush shiny sci-fi backgrounds that help give a unique futuristic vision to the adventure, while also relying on darkly fluorescent lighting to create tense atmospheres around the ship and resort. The music score is also surprisingly theatrical for a straight to video animated film, using bombastic orchestra or creepy ambiance to fit the movie’s themes of space travel and alien terror. 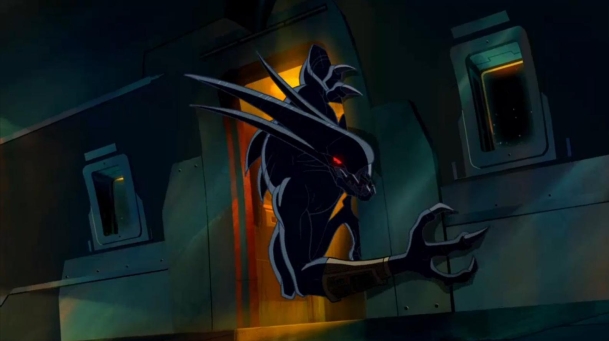 What about the mystery? An important aspect of any Scooby Doo story! Well, the alien itself is quite uninspired, being a clear knock off of the Xenomorph, but I guess younger audiences won’t notice this, and where else will we see “Alien Vs. Scooby Doo”? Haha! To avoid spoilers, I won’t say what’s really going on, but it’s a twist that is foreshadowed a tad on the nose at the start, as we get another Scooby Doo villain who is far from subtle about putting on an act; however, i’ll give credit where it’s due, and admit that their evil plan was very cleverly put together and made sense for the character.

To conclude, Scooby Doo! Moon Monster Madness suffers from some pretty boring storytelling, turns our heroes into annoying or vindictive stars, gives us lots of painfully unfunny jokes that try TOO hard to score laughs, plus even ends on a weird moral that you shouldn’t need to be an experienced astronaut to go into space, average people are entitled to board a ship just because they want to, and anyone who gets in their way is a big meanie (erm, what?…) 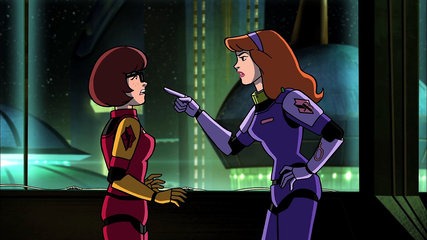 However, I have to admire the grand science fiction backgrounds, clever use of atmosphere, and wonderfully constructed music score. Not to mention, many of the supporting characters are a blast, all bringing the best humor in the film through their sheer wackiness or witty dry sarcasm. It’s a mixed bag, I wouldn’t watch it again, but I respect the things that work about it.

Posted on May 2, 2018, in Uncategorized. Bookmark the permalink. 2 Comments.