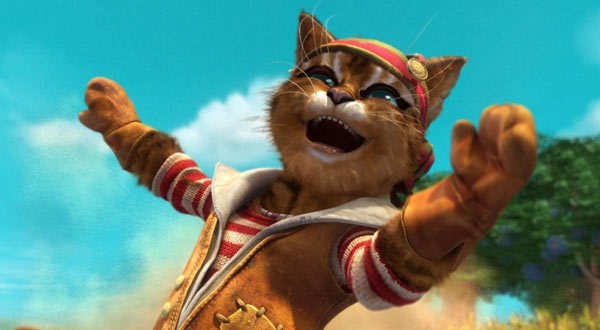 This is a French-Swiss-Belgian animated fantasy comedy. When a young miller boy called Peter inherits a talking walking cat from his deceased father, the cat promises to help the lad win the heart of the Princess, by helping him convince the queen that he is a Marquis, and worthy of her daughter. However, the Royal Chamberlain is onto Peter’s act, which will get in the way of his evil plan to make the princess his own, and so he tries to prove that Peter is a liar.

For crying out loud, this was a nauseating sit! Every character in this movie refuses to stop moving or talking, as if a bomb will detonate if they decide to breathe or pause, and it makes for a ridiculously aggravating experience. The film is a prime example of what happens when you ignore the rule “Only keep the dialogue that’s important”, because every waking moment is dedicated to characters saying something; it doesn’t matter what their lines are, they just HAVE to say something, and it makes paying attention painful. 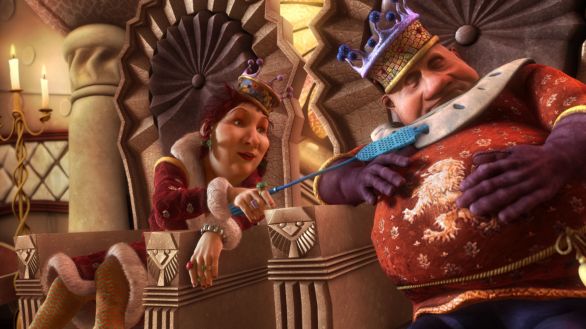 While characters talk, they’re either finding an excuse to dance out of nowhere, flapping their arms about like they’re swatting a swarm of mosquitoes away, or doing anything it takes to not stay still. As I’ve said before, good animation requires pauses, not just to make characters look like they’re thinking before they move, but also so they don’t end up annoying the living shit out of the audience. I know the fear of making characters look under-animated or dead, I really do, but making them prance about incessantly isn’t the only way to avoid that, as pauses or slow gestures can play a part in a character’s organic realism.

The film is also sort of a clone of Disney’s “Aladdin”, but it doesn’t understand what made “”Aladdin” work! Peter pines after the princess before ever even meeting her, making him seem like a creepy stalker, while Aladdin didn’t fall for Jasmine until he got to know her a bit. Peter is also no Aladdin, he spends the whole film stuttering nervously or whining under his breath, as he follows the Cat’s orders like a spineless mopey twit. While the Princess in this film is awfully shallow, implying that she’ll only fall for a man who can sing or dance, ignoring any qualities that are important in a relationship, just to hammer in how her only character trait is that she likes performing; she’s not even that great of a dancer or singer. 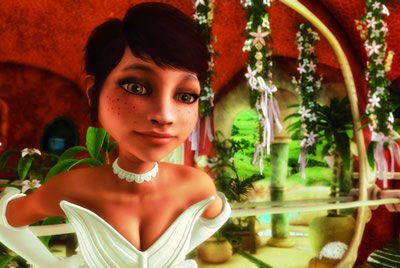 Oh and throughout the film, she secretly puts on a mask to dance/sing in secret from her family, even though the Queen knows of her hobbies? And doesn’t judge her for them? Maybe she’s afraid to let her parents know she’s dancing in a tavern, but it’s never clear that the Queen has something strongly against this? And the mask doesn’t even hide her identity very well, yet our heroes take FOREVER to work out it’s her. 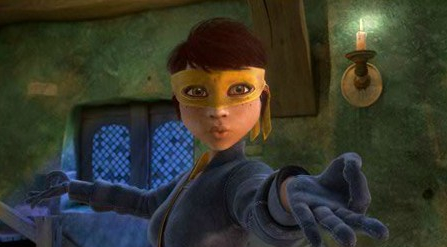 The Chamberlain is a rubbish antagonist, being far from discreet about his villainy, to the point where EVERYONE hates him with a passion, begging the question why the Queen hasn’t fired or executed him yet? Yes, Jafar was flamboyantly sinister, I’m not going to naively call him subtle, but he at least went to extra lengths to keep up his act, and used his staff to hypnotize the Sultan. The Chamberlain isn’t even a funny comical bad guy, as most of his lines consist of long winded expository evil monologues, and his animation is the most irritatingly over-active out of all the characters. 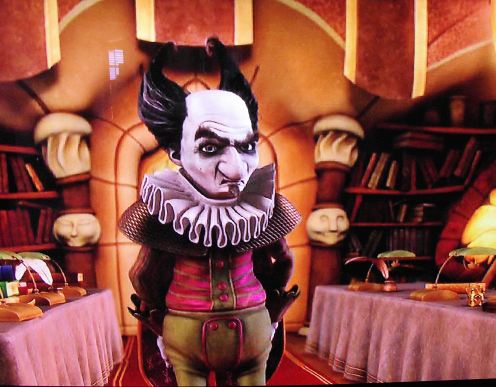 The Cat himself is a terrible liar too, because he keeps yapping away constantly, making him less of a suave witty prankster, and more of an idiot who doesn’t know when to stop talking. Yes, he gets away with his con tricks, but only because it’s easy as pie to calm the Queen’s suspicions, and the film wants to keep the act going for the sake of pushing the narrative forward. I also didn’t buy the film’s tacked on message about friendship, because Peter always seems pissed off with the Puss, never fully trusting the feline’s plans ahead, and coming off as fed up with the Cat’s ideas for trickery. Contrary to popular belief, this film wasn’t designed to rip off Dreamworks’ “Puss in Boots” spin off, as that film came after this one, but the Cat’s resemblance to the Shrek’s version of Puss is unmistakable. 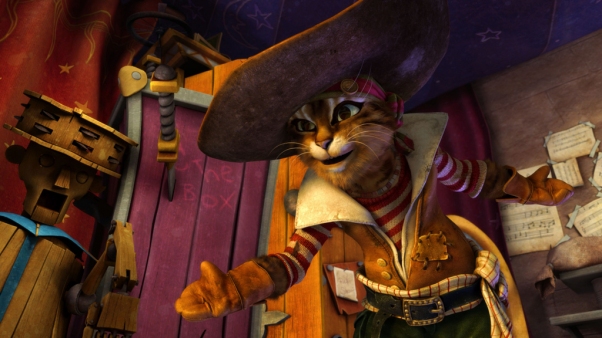 Visually, while I appreciate how much effort has gone into the rendering, the characters have this strange exaggerated uncanny valley style to them, making them appear like creepy mutants, and some even boarder on looking similar to the humans from “Food Fight!”.  Sure, some of the backgrounds can look pretty, especially a couple of sunsets, but it’s hard to keep our eyes on the screen, when characters are so repulsive to look at. Sometimes, realism isn’t a good thing! If you try too hard to push animated characters to look photo realistic, while staying true to cartoon aesthetics, then the characters end up looking… well… wrong?

Now, I didn’t watch the version of the film that included the infamously bad William Shatner dub of the Cat, but I did see this movie in English, with Richard M Dumont as the Cat instead. While Dumont is far more listenable than Shatner’s bizarre high pitched warbling, he doesn’t really bring anything unique or fun to the role, sounding like Fat Tony doing a poor impression of Antonio Banderas. Everyone else in the cast is clearly struggling to match their performances to the mouth movements, leading to some iffy deliveries, where actors draw out or speed up certain syllables, and it’s all very distracting to say the least. 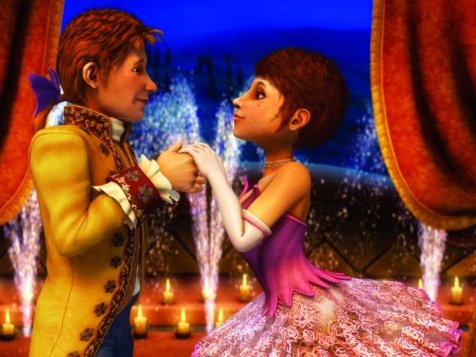 The Music for the film is very different to your usual soundtracks, employing various European instruments and lots of Kazoo, but listening to it can be grating, because it sounds so loud and infantile. I’m sure kids will find this score to be cute, but other family members might end up getting wound up by the quirky kazoo squawking. I’d say that the music is the only interesting aspect of the film, but I can’t in good conscience, conclude that it’s all easy on the ears.

To Conclude, “The True Story of Puss ‘N Boots” is a nightmarish looking film, with unlikable flat characters, noisy dialogue, and hyperactive animation. Half the time, it feels like we’re watching a film make things up as it goes along, throwing in the first idea or line that comes to mind, because there’s so much rambling nonsense going off. Maybe kids will like it fine? But it’s not one of those films that they can enjoy with their family, or a movie they’ll appreciate as they get older, because it panders so much to their age range.