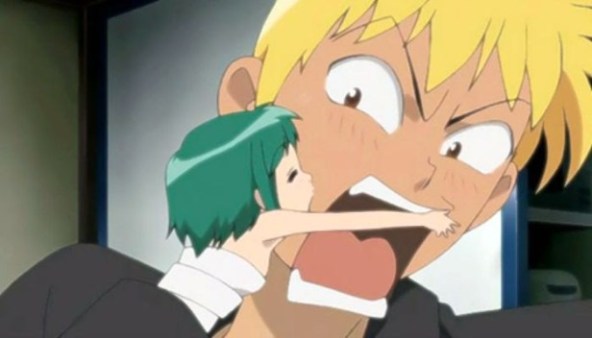 Seiji is a tough guy renowned for his right hand’s powerful punch, using his talent to defend bully victims from gangs, but he struggles to find a girlfriend thanks to his violent reputation, and this makes him lonely. All that changes, when he wakes up to realise that his hand has turned into a girl called Midori! But Midori isn’t just any girl, she’s had a crush on Seiji for ages, knows about Seiji’s kinder side, but never had the courage to confess to him. Meanwhile, Midori’s actual body is stuck in a sleep, her family don’t know how to wake her, relying on spiritual shamans to work out what’s happening, and Seiji is clueless how to solve this predicament.

“Midori Days” is a very silly show with an odd concept, lending to some great comedy, fueled by the clashing personalities of sweet Midori and bad tempered Seiji. While Midori is a cute loudmouth with so much love to give, Seiji struggles to crush his badboy image in fear of letting others find him vulnerable, these opposing characteristics make for laugh out loud humour, because Seiji is stuck to a girl who is far more openly romantic than him. 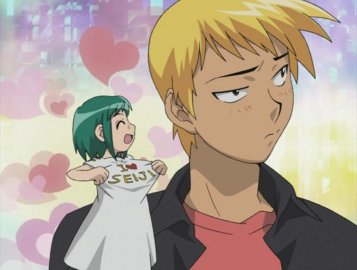 This comedy is supported by a cast of additional characters, with only a select few knowing that Seiji’s right hand is now a girl, these characters mix up the episodic formula of angry boy Vs. cute girl, while also throwing in some tension into their secret, and testing Midori’s ability to keep quiet. We never know how anyone could react to Seiji’s new right hand, so we’re left biting our nails as someone comes close to unearthing the truth, hoping they don’t hurt Midori once they find out! But at the same time, some characters develop feelings for Midori & Seiji, which complicates things even more, especially when we end up rooting for others to have their chance, even though we know Midori is the one. 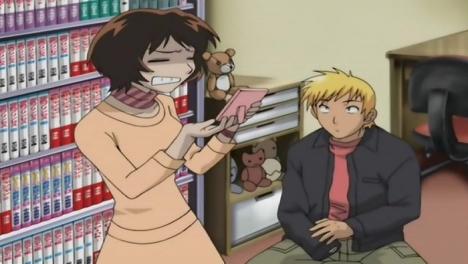 These characters don’t play straight to our quirky leads though, they can be just as eccentric, from Seiji’s cruel naughty older sister (who boarders on being a villain sometimes), to a weird doll collector who becomes infatuated with little Midori, and many others. They all get the right amount of episodes, never overstaying their welcome in the show, letting their dynamic be the strength of episodes, and not once having no purpose in an episode. It is also fascinating watching Seiji interacting with characters outside his secret relationship with Midori, as we get to learn more about him through these friendships or family, and he does prove to be more socially conscious than we originally thought.

I’ll admit that the comedy can sometimes get a little lewd, even nearing the realm of being an ecchi show sometimes (don’t expect nipples to be discreetly censored, folks), but it’s naughty comedy rarely feels that forced, except when the series has it’s obligatory “accidental witnessing of nudity” gag, which was prevalent in early 2000’s anime comedies. Most of the more crude jokes are setup in a way that makes sense, because characters are forced into a position where they feel like there’s no other choice, like when Seiji thinks that merging his right hand with Midori’s sleeping naked body will fix things, but it just makes her family think that he’s a groping pervert. 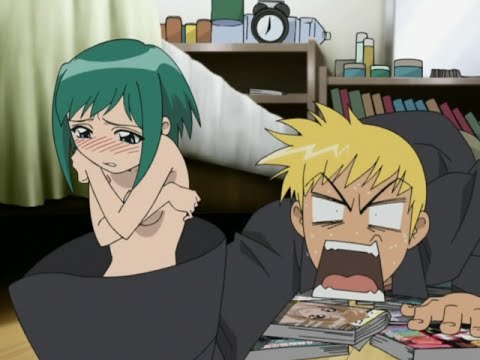 The show isn’t just a goofy anime about a man stuck with a girl for a right hand, it does go deeper than that, letting us get to know our romantic leads, why they became who they are, and developing their relationship through mundane activities. Even though Seiji is a bad tempered punk, he can be really sensitive to those around him, it’s Midori’s affectionate open hearted personality that brings his more considerate side out, and I love seeing salty characters like this struggling to open up. Midori’s adorable antics keep the show’s energy alive, but we later learn that she’s not always been this bubbly, and it’s her literal closeness to Seiji that opens up her confidence. I couldn’t help but smile at these two, they grow a very believable bond, connecting on a special level while stuck together, and go the extra mile to make this all work. 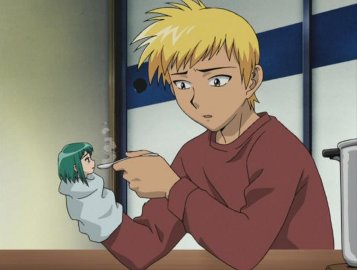 The only big downside to the show, is that even after building up so much, it doesn’t provide a very satisfying ending, having the same problem as most romance anime of the time, cutting things off when there’s clearly more to tell, and it’s a rather anti-climatic finish to such a fun interesting setup. I guess some audiences will be satisfied on some level, as it does give the characters a chance to open up their feelings, a problem that both had before Midori became Seiji’s right hand, but I still wanted the two talk about all their experiences together, and they don’t get to.

I was also always curious about how Midori ended up becoming Seiji’s right hand, there could have been any reason why, the writer’s imagination was the only limit, but sadly, we never get any answers. Sure, maybe the point of the story wasn’t the supernatural elements, perhaps the focus was on pushing these characters to conquer their shyness, but the right hand curse is still a HUGE hook to the show’s concept, and I was eager to see a creative fantastical reason behind it’s occurrence.

To Conclude, “Midori Days” is a delightfully kooky show with lots of laughs, but underneath it’s silly idea is a heart of gold, and it knows how to find the right balance between it’s comedy & drama. The comedy might get a bit too raunchy sometimes, but it’s tame compared to full on ecchi shows from the same era, and it is capable of branching out beyond just nudity gags. I did smile and laugh a lot while watching series, it’s very entertaining, incredibly cute at times too, and I became quite attached to the characters, but I think that’s why the abrupt ending tastes so sour.

Posted on August 1, 2018, in Uncategorized. Bookmark the permalink. Leave a comment.