“Despicable Me” centres on a villain called Gru, an eccentric criminal with a strong European accent, who needs to steal a shrink ray from a fellow bad guy named Vector, but Vector’s home is defended by intricate booby traps. So, Gru adopts three girls called Margo, Edith, and Agnes, then orders them to sell cookies to Vector, but these cookies are really robots designed to snatch the shrink ray from Vector. Gru’s plan is to shrink down the moon, so that he can have power over the whole world, and prove that he’s that best villain ever. However, Gru starts becoming attached to the girls, they bring out his softer side, and he begins falling in love with the precious kids, will this ruin his world domination plans?

I used to consider “Despicable Me” to be just okay, a passable effort, yet re-watching it for this written review, I developed a better appreciation for it, and enjoyed it more than ever. Maybe it’s because of my current wave of paternal feelings, something I’ve been open about recently, but I think that “Despicable Me” deserves more credit than I gave it before. Yes, it’s not the greatest children’s film made, it doesn’t deserve to be put on a pedestal of any kind, but as far as Illumination films go, this one is a cherry in their bowl of raisins. 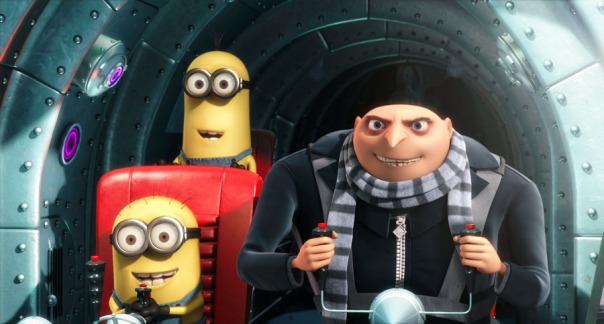 While the “Despicable Me” sequels overload themselves with too many plots, the first movie keeps things simple, which is where it’s charm comes from, because it knows exactly what it’s going for, and doesn’t complicate things with a dozens of obstacles. It’s the tale of a villain trying to juggle being a criminal and a foster father the same time, with his inner conflict over these two lives being a central focus for the overall narrative. Sure, the other “Despicable Me” films have Gru facing multiple conflicts, but they rarely address how Gru feels about having more than one predicament, because they just want to keep things busy, while the first film does stop to let Gru’s feelings sink in.

The girls themselves are as one dimensional as they come, Margo the mature one, Edith the weird one, and Agnes the cute one, but that’s not to say that I didn’t like them, because they’re all very cute, and act like real genuine kids. It’s their budding relationship with Gru that serves as the heart of the film, with their natural youthful charm bringing out their adoptive dad’s more sensitive side, and their scenes together as a foster family are too adorable for words. Gru might be a grumpy bum around them at first, reluctant to admit that they are sweet kids, but that’s because he was raised by a rubbish mother who stifled his self esteem, he doesn’t understand how to be nice to kids. 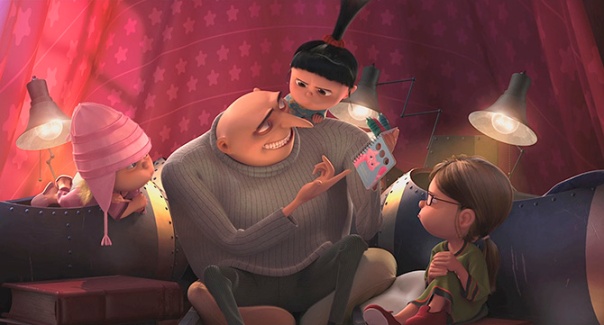 You can tell that he does have paternal feelings deep down, considering that his minions are child like creatures who look up to him, which makes me believe that he hired them all for a subconscious reason, and they fill a hole that his mother made. The minions themselves, while not as funny as I used to think they were, are entertaining little guys, and the film doesn’t overexpose them as much as the sequels do. Yeah, they can have some unnecessary moments of comic relief, but in the grand scheme of things, they do play a part in the overall narrative, and contribute a little something at points.

Seeing as Gru is a villain, it must have been hard to come up with antagonist, but Illumination found a good compromise! Gru is an underdog in the villain community, someone who struggles to make it big as a criminal, helping us to sympathise with him, and hope that he gets the shrink ray. We boo at Vector, because of his over-privileged advantages, self important personality, and wormy twerp face that needs a good punch.

Unlike Vector, Gru grows as a character, unabashedly embracing his more feminine attributes, while becoming a stronger father to three daughters, and this is why we cheer for him when he goes up against Vector. Oh and isn’t it surreal that Vector is voiced by Jason Segal? An actor renowned for playing big softies? Yet he totally nails the role, having a blast bringing out his darker side.

The finale, which I refuse to spoil, tests Gru as a dad, pushing him to prove that his love for his daughters is worth cherishing, and super villainy is the right path for him. It’s a very emotional climax, supported by the strength of the bond between Gru and his girls, but it never gets too over-sentimental, because it’s drama is very sincere. I wanted this family to be together, I cared about Gru learning to open up after years of emotional repression, and I totally hated Vector enough to be engaged in his defeat.

To conclude, “Despicable Me” is a simple film, but that’s what so great about it, it doesn’t try overdo itself, and puts all of it’s attention on finely crafting a straight forward story. It’s not something that warrants more attention, or a movie that breaks the mold, but it does deserve to be appreciated as a well made effort for what it is. It’s more than just a cute film, it’s the story of an emotionally repressed man with mummy issues, who learns to love children of his own, in an environment where evil is the norm, and it’s a well executed take on that set up.

I don’t expect everyone to enjoy it as much as I did, because I get why they would be underwhelmed, but after sitting through many mind numbing and insulting kids’ films, revisiting “Despicable Me” made me have a much more optimistic angle on what it’s going for. If “Illumination” stuck to the spirit of this film more often, they could end up making something that’s able to compete with the big boys, but we will have to see about that.

CLICK HERE TO VOTE FOR THE NEXT FAN CHOSEN WRITTEN REVIEW!

Posted on November 5, 2018, in Uncategorized. Bookmark the permalink. 5 Comments.