Sinbad is a sea captain leading a band of thieves, his next steal is the book of peace, an item that brings harmony to 12 cities, but when Eris, the Goddess of Discord, takes it from it’s guarded tower in disguise as Sinbad, he is sent to death by beheading. His childhood friend, Prince Proteus of Syracuse, volunteers to take Sinbad’s place, and Sinbad has 10 days to get the book back from Eris, or Proteus will be beheaded. With help from Proteus’ fiancée, and his loyal crew, Sinbad travels the seas to retrieve the book of peace from Eris’ domain, but Eris has some obstacles in store for them.

This film doesn’t really do anything exceptional, following the usual formula for most sea fantasy adventure movies, a band of travelers take a quest across the ocean while facing monsters, and it doesn’t really leave the guideline of this formulaic setup. That being said, it’s not a bad film, it’s still a fun movie that will keep families entertained, and I can safely say that I enjoyed it just fine. I get why it wasn’t smash hit, it’s as generic as they come, but it shouldn’t have deterred Dreamworks from making anymore hand drawn movies.

Each monster is a new surprise, they all have their own unique designs, one even gets mistaken for an island at first, while another requires Eris to freeze the sea in order for it to inhabit the crew’s path. The confrontations with the monsters are a blast, as you can tell that a lot of energy went into the film’s action, there’s constant momentum as our heroes use their wits and sword skills to conquer their obstacles, it never gets boring because of this. Their ship is also pushed and pulled in every battle, it’s scars showing how unforgiving every threat is, with Eris throwing everything she can at the sailors.

Sinbad makes for a charming anti-hero, he’s grumpy and surly, but there’s a smoothness to his confidence and a wink in his eye when he shows off. Sure, he’s sometimes a bit of a dick, but his passion for the sea is endearing, and he does have a good heart deep down. Marina isn’t your typical token female or damsel in distress, she’s a feisty heroine who proves the sexist Sinbad wrong, when she ends up saving the day, demonstrating that she is a fully capable sailor when things get tense. Sinbad’s crew aren’t exactly memorable, each one limited to having a simple one dimensional trait or even no distinct personality at all, but they likable enough company with their own funny moments.

Sinbad and Marina’s relationship is your cliche Hollywood romance, starting off with the usual bickering and arguing, then developing into something more intimate, it’s nothing new for a movie love story. However, their banter can be funny or cute at times, they do have a spark once they warm up to each other, and the romantic tension is a little saucy, because it’s a forbidden love due to Marina’s engagement to Proteus. I didn’t end up buying their eventual “I love you” though, because they spend a lot of the movie together down each other’s throats, and only develop chemistry much later on.

Eris is actually a rather interesting villainess for who she is, as she is mainly committing evil out of fun, creepily using her mortal spying to get inside our protagonist’s head, and I do love how she transforms her fluid watery body (especially in a scene that requires her to step into a Sinbad disguise). A lot of the film explores Sinbad’s lost heroism, something that faded when he and Proteus went their separate ways, with Eris tapping into his conscience by manipulating him into doubting his moral compass, and this all makes for an engaging hero-villainess dynamic. Not to mention, Michelle Pfeiffer sizzles as the voice of Eris, playing her with a spiteful tongue and flirty sexuality, it’s a terrific vocal performance. 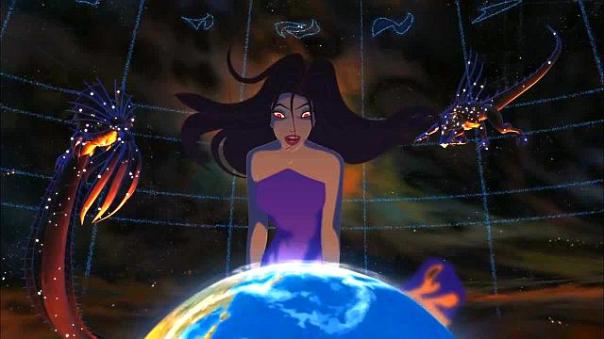 Visually, the film is full of exciting colours and charismatic animation, everything certainly pops, especially when characters break out into a sword fight or battle a monster. The only thing that lets the film’s imagery down, is it’s terribly aged CGI animation, which is used for sets, props, and monsters; it’s painfully bad to look at, because it doesn’t naturally blend with the hand drawn characters, and the rendering has aged as well as a sandwich crust that fell under the sofa. Of course, Dreamworks would one day become giants in the computer animation industry, with such hits as “Shrek” and “How to train your dragon”, but their primitive CGI effects for this film are pretty ghastly (even critics at the time were appalled by them).

To Conclude, “Sinbad and the Seven Seas” doesn’t break any molds, it’s basically “Jason and the Argonauts” for the 2000’s, but it has a fun bouncy energy! It’s action packed with cool combat choreography, there’s a diverse collection of monsters, and the villain is quite entertaining to watch. It follows many cliches of Hollywood action adventures, particularly with it’s romance elements, yet there’s still a likable charm to it that stopped me from yawning every 5 minutes. I’m not surprised that it didn’t blow people away, it’s nothing original compared to what’s come before in it’s genre; I just don’t think it deserves to be seen as Dreamworks’ embarrassment, because they have done MUCH worse since.

CLICK HERE TO VOTE FOR THE NEXT FAN CHOSEN WRITTEN REVIEW!

Posted on November 7, 2018, in Uncategorized. Bookmark the permalink. 1 Comment.