The Smurfs are a village of little blue people, who are being hunted down for their magical essence by the evil wizard Gargamel, but try their best to live in peace during the blue moon festival. When Gargamel begins chasing down the Smurfs after finding their village, a group of them lead by Papa Smurf end up jumping through a portal to escape, said portal takes them to New York city, where they meet marketing executive Patrick Winslow.

When filmmakers don’t know how to adapt a source material into a feature film, they tend to use this uninspired formula: Send them to an American city (always usually New York), where they must avoid or escape a villain, and make them interact with humans in an excuse to come up with a safer cheaper story. Rather than being about the Smurf’s imaginative world, this film focuses more on the cliche joke of “Haha these alien creatures don’t understand human culture, they’re so silly”, while splicing in a run of the mill workaholic story involving human characters.

As usual too, the film guilts Patrick for not putting his family or the fantastical characters before his job, when really, he NEEDS his job to support his loved ones, it’s the very problem with this type of story. Yes, your family is special, but without an income, you can’t exactly feed and shelter them, so this message comes off as naive. His own wife, who may show concern for husband’s job, actually says that the smurfs are “The Bigger Picture” when he is stressing over possibly being fired, as if the little blue people are a bigger concern than their livelihood.

Yes, the film is clearly trying make the Smurfs be an analogy for Patrick’s baby, but it’s an unfair comparison, as the Smurfs have invaded his life and are making him to put their dilemma before his career, while a baby is something Patrick has planned out with his family in advance. Patrick’s baby WILL be important, but he shouldn’t be expected to drop his work duties for the infant (unless it’s an extreme medical emergency, of course), he still has to commit to his job, ESPECIALLY during this very important stage in his career, or he’ll end up raising a child on the streets.

The Smurfs themselves are very aggravating, constantly moving or talking, having the energy of a Cheetah on Red Bull, always using “Smurf” as a pun for EVERYTHING (a joke that lasts for one microsecond), I never felt enamored by them, because they are more than annoying than charming. It doesn’t help that they all have the limit of being stuck in one trait personalities, their names defining their ONLY identity as characters, such a lack of dimension doesn’t make for creatures I can enjoy watching for almost 2 hours.

Even Papa Smurf, the most laid back of the Smurfs, is hard to like, why? At the start of the film, he learns of a prophecy that involves all the Smurfs ending up in Gargamel’s cages, but he hides this information under the belief that he’s protecting them. This makes the Smurfs WAY too confident and relaxed about their predicament, assured that things will pan out fine, when they should be taking things much more seriously.

The film does attempt to make Clumsy Smurf have an arc, trying to prove that the other smurfs shouldn’t undermine him due to his accident prone nature, but he makes no effort to learn self coordination throughout the film, he just whines that he’s never included, then suddenly he gets to do something right in the finale.

Why couldn’t he have learned a sport from Patrick? Or Maybe someone could have built him a mini gymnastics stage? He’s not allowed to join the action anyway, why not help him improve in this time? Without practice, I can’t blame the other Smurfs for not letting him help them, when his track record of accidents outmatch his efforts to grow.

Gargamel isn’t much of a fun villain… Most of his humour is based on gross out jokes, he is easily distracted, he rambles unfunny monologues, and he isn’t even scary or menacing once he has power. Kids might laugh at him getting hurt, or giggle at him making pee jokes, but he’s far from a well written antagonist, and parents being forced to watch the film will just roll their eyes at him. Although, fairplay to Hank Azaria for trying his best to bring Gargamel into live action, he is attempting to recreate the character, it’s just a shame that the film has no idea what to do with him most of the time.

Don’t get me started on all the product placement in this film, there’s constant excuses to advertise things in this movie, which is disgustingly crude when the target audience is so young. From an excuse to film a scene in a toy store to a whole scene dedicated to the Guitar Hero, it’s utterly shameless how this film puts commercial opportunities before telling a story with good faith. 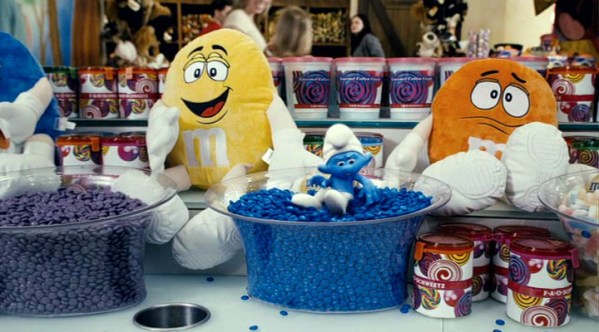 I wanted to be fair, by finding at least something about this film that’s good, but it’s a real challenge, when there’s not enough sincerity behind the film to compliment. I guess that the voice actors are well cast, each one doing decent jobs portraying their assigned personality, even if their characters have as much depth as a puddle in a dry dessert. Neil Patrick Harris, who is obviously on here for a cheque, does try to bring his trademark charm to Patrick, despite what little there is to deliver his magic to.

Patrick’s wife Grace does have a sweet girl to girl bond with Smurfette too, I can imagine little girls in the audience resonating with their relationship, mainly those who feel like they struggle to find other girls to befriend, maybe because they’re surrounded by boys or lack the confidence. That’s the thing too, I may dislike Grace’s insistence that the Smurfs are more important than anything, but she is a nice lady, she has a maternal kindness that children will like.

This movie is as cynical as they come, putting 5% effort into it’s bland script, and depending too much on easy pandering to get butts in seats. I heard it was bad, but I think I underestimated HOW bad it would be, maybe because I had a small glimmer of hope. Children deserve so much more than this movie, way much more, it’s all a ruse to advertise toys & candy to them, under the guise that they are paying tribute to a beloved comic strip by Peyo, without actually faithfully adapting it.

Posted on April 29, 2019, in Uncategorized. Bookmark the permalink. 5 Comments.