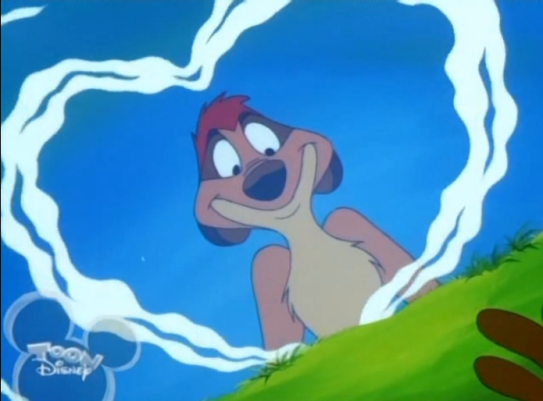 When Cupid shoots his arrow at Timon with the intention of playing meerkat matchmaker, Timon ends up falling in love with himself, and Pumba becomes the third wheel for his best friend’s dates.

I’ll admit that the setup for this episode is a unique twist on the Cupid’s Arrow formula. Most cartoons that use this plot to create misunderstandings or pair up unlikely couples, but this one turns it into a tale of vanity. 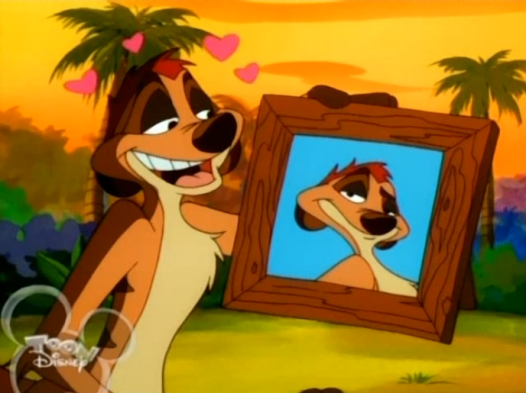 The problem is that this is a one joke premise that can only go so far, and is only funny for the first few minutes. Once we know that the narrative is basically spoofing every romance cliche in the book, but with the constantly same gag of Timon and Timon being the couple, then the humour becomes very predictable.

If anything, the joke just gets weirder and weirder as it goes along; to the point where I stopped laughing and started feeling strange. I was expecting Cupid to fix the mistake any second, so that the episode could find jokes from other pairings, but the Timon and Timon love story just keeps going and going. That’s the issue with stretching out a joke this thin, it can only escalate towards the level of uncomfortable awkwardness.

Stakes are only introduced once Timon starts blaming Pumba for his failing self-relationship. This leads to the meerkat cutting off his best friend, but that only lasts a minute, because the two patch things up very quickly. After making up, Pumba encourages Timon to marry Timon – which isn’t too far-fetched when self-marriage (also dubbed as “Sologamy”) is a real life ceremony practiced by single people.

While folks are divided on self-marriage being a sign of narcissism or an empowering vow of remaining single, it’s clear that this show is playing the wedding for laughs, and Timon is just going through supernaturally-imposed narcissism – which is what makes the ceremony kind of “iffy” to watch. Luckily, Cupid FINALLY steps in to put an end to all this.

The episode does try to have a heart to it’s bizarre plot, by highlighting Pumba’s loyalty during this whole situation – even though what’s happening really confuses the Warthog. While I do appreciate Pumba’s faithfulness as a friend, I don’t think that his validation of Timon’s narcissism is a good example of healthy friend support (especially when it leads to Timon briefly destroying their friendship).

To conclude, I think this cartoon is maybe testament to why not many comedy writers have approached the “Cupid’s Arrow” story this way before. There’s only so much you can do with the joke of characters falling in love with themselves before the comedy gets stale or uncomfortable.

It’s also pretty impossible to add genuine sincerity to a tale of vanity, because there’s a big difference between wholesome self-value and straight-up unhealthy egomania. If anything, this plot would have worked far better for a darker TV show, rather than a goofy and wacky cartoon like this, because of the tricky connotations attached to it and limited potential for humour.

Posted on May 27, 2020, in Uncategorized. Bookmark the permalink. Leave a comment.