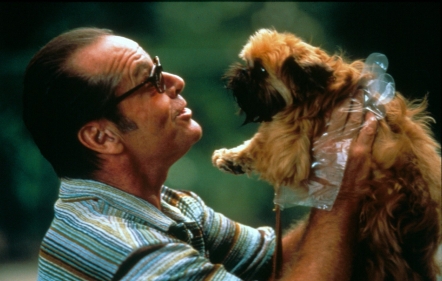 “As Good as It Gets” is a romantic comedy drama from The Simpsons Producer James L. Brooks, it’s about a surly writer with OCD called Melvin (Jack Nicholson), who ends up falling for a single mother waitress named Carol (Helen Hunt).

The problem is, Melvin is a grumpy old man who struggles to be a decent human being, and has a lack of social etiquette. One day, Melvin agrees to take Carol and his artist neighbor Simon (Greg Kinnear) on a three person road trip, what will this mean for Carol and Melvin’s relationship?

Now, it’s often hard to sell a rom-com to most people, as they’re renowned for being formulaic stale movies with a lack of sincerity. However, “As Good as It Gets” really stands out as one of the more unconventional romance stories that cinema has to offer.

I mean, our couple couldn’t be more far apart in terms of personality, age, and values. Yet, there’s a real charm to seeing them struggle to connect in some emotional way; to the point where we want to see how this dysfunctional pair can work together. When a film can make a you crave a satisfying conclusion for the bizarre matchmaking of devilish Jack Nicholson and sweet Helen Hunt, you know it’s doing something right.

Melvin is a prime example of how to write an unlikable character right. Yes, he’s bigoted, rude, and spiteful; but there’s something immensely fascinating about his character. There are moments where we hate his guts, but then we’re won over by his ability to weave romantic words as a skilled writer.

Not to mention, Jack Nicholson gives Melvin some mesmerising physical quirks, that make him beyond interesting to observe. The film tastefully finds relatable humour to his obsessive compulsive disorder, a sense of comedy that actually wonderfully humanizes him.

There’s a hidden soft underbelly to his character too, another side of him that the kind hearted and strong willed Carol brings out. He’s doesn’t grow into Prince Charming overnight though, as sociopaths like Melvin don’t improve that easily, but we can see a kinder man painfully struggling to break through.

The Supporting character of Simon, adds some extra humanity to the film. He’s an openly gay man with problems with his parents, and he’s just started recovering from a recent robbery attack. Simon is a very broken man, financially, physically, and spiritually; made even more vulnerable by the sour personality of Melvin.

The conflicting and complex relationship between Simon and Melvin is a highlight in the film, because these are characters designed to clash, but we want to see them bond in some way. I loved seeing Melvin overcome his homophobia, to develop a touching friendship with Simon. As the film goes on, these two end up showing well meaning love and support for eachother; despite the rocky start to their neighborship.

The way characters express themselves in this movie, feels genuine and human, thanks to the writers’ dialogue; but it’s the amazing actors that bring a deeper pathos to the strikingly convincingly realistic dialogue. I’m not kidding, when I say that this film showcases a cast of actors at their best. If you’re a budding thespian wanting a career on screen, check out this film for raw inspiration.

Although, while this IS one of the more unusual rom-coms out there, I will confess that it’s music score suffers from being a little saccharine at times. Yes, the score is the film’s biggest detriment, as it sounds like it’s always gearing up to tug on our heartstrings. It’s a tad offputting, and goes against the tenacity and realness of the film. I did get used to it after a while, but it might push folks away from the film.

To conclude, “As Good as It Gets” is one of those rom-coms that goes against the norm. It’s a  film that isn’t hesitant to cut the bullshit, by criticising the ugly flaws of it’s lead character, or by showing characters opening up about how scared or damaged they are.

Yes, it can slip into corny territories with it’s score, but there’s still an honesty to the film that really cuts deep. Don’t expect a laugh riot, as this is a very human drama as well as a black comedy; but do be prepared to enjoy yourself thoroughly. This was my 3rd or 4th time watching it, and it still remains one of my favourites from it’s genre. If “As Good as It Gets” isn’t on your Netflix watchlist right now, I highly encourage you to change that. Oh and expect a couple Simpsons voice actor cameos from the film too haha!