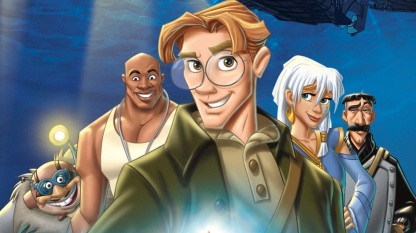 “Atlantis: The Lost Empire” is an action fantasy adventure feature from Disney, directed by Kirk Wise and Gary Trousdale; who were also responsible for the academy award winning “Beauty and the beast”. The story follows linguist Milo Thatch, who joins a skilled crew of unique talents, led by military official Commander Rourke, and goes on a quest find the mysterious lost city of Atlantis. In Atlantis, Milo befriends a local called Kida, the two of them try to uncover the secrets of Atlantis, and find a way to save Kida’s fading world.

This film makes the journey to Atlantis feel strenuous and gruelling, the explorers face obstacles blocking them from Atlantis, and their trip takes up the first half an hour of the film; thus giving us a rewarding satisfaction when we finally reach the lost empire, because we feel like we have gone through a lot to get there.  Then, once in Atlantis, we get to watch Milo and Kida exchange cultures, and they seem genuinely fascinated by eachother’s worlds.

Unfortunately, the movie isn’t 100% interested in Atlantis itself. Sure, we get to see Atlantian foods, secrets and customs, but the film steers itself more towards something else; the twist that Rourke’s crew are the bad guys, and want to steal Atlantis’ life source for money. That’s right, yet another Disney movie about how mankind can be greedy and money is evil; a message that Disney already hammered into audiences in both “Pocahontas” and “Tarzan” (Then later again in “Home on the range”).

Rourke’s crew aren’t even that interesting to begin with! Rourke himself is just a cookie cutter capitalist villain (He’s like a clone of Clayton from “Tarzan”, but minus the charm of Brian Blessed’s campy voice), and his team is mainly made up of one dimensional characters only defined by their jobs (Cookie the Cook, Mole the digger, Audrey the mechanic, Sweet the doctor, Vinny the demolition expert, etc.).

Sure, the premise behind each character has potential, plus they can be funny at times, and the film does briefly touch on their backstories; but the movie doesn’t do much with them, limits them to being caricatures, and decides to narrow down all their motives to money.

To be frank, I was less invested in Rourke’s crew, and more interested in Milo himself; who seems legitimately fascinated with Atlantis, and genuinely caring towards it’s culture. Milo’s nervous nerdy energy, lanky design and passion for education, are all remarkably unconventional traits for a lead action hero too.

It’s frustrating, I was in the middle of enjoying watching Milo learn about Atlantis, and then suddenly my education was interrupted by a different plot line. It’s like watching a really fascinating academic seminar, abruptly being disrupted by a bunch of loud jocks; who just want to party and fight.

Here’s the thing, the movie didn’t NEED an additional plot line like this! Atlantis itself already has the ongoing conflict of being a dying civilization; and Kida believes that Milo’s knowledge of their ancient language, will help them save her people. So there you go, there was already a sense of tension, and a goal for our heroes; save Atlantis by learning more about it before it dies. The fact that much of Atlantis is protected by dangerous ancient guards, also implies that physical threats were already present in the story.

Bringing in the whole exploitative Westerners idea wasn’t warranted at all, and just ends up disrupting our engagement in Atlantis itself. Sure, the movie lets Milo and Kida do a bit of exploring, but not as much as they could have, because the attention is on the villain’s exploitation of Atlantis. We learn about the heart of Atlantis, but only because it serves as the villain’s source of money making, and not because the movie wants to expand this world.

This is another case where maybe Disney felt uncertain about the film’s narrative, and so they nervously relied on a familiar formula to cushion their insecurities. It’s a shame, because the aspect of Atlantis’ mystery shows so much promise, as there are many breathtaking moments that illustrate the fantastical wonder of Atlantian fantasy; scenes that are animated and scored with immense depth and beauty. Those moments of profound imagination and poignancy, indicate a hidden film that could have tapped into something extraordinary.

To be fair though, the movie’s decision to centre more on a military led expedition than Atlantian culture, does lead to some surprisingly explosive and high octane thrills for a Disney feature. You’d think Disney would be reluctant to get this intense, but they actually let Wise and Trousdale take the movie’s action in a more adult direction. I mean, how often do you see Disney characters carrying lethal weapons? Haha!

To conclude, “Atlantis: The Lost Empire” showcases some unique ideas, but it clearly doesn’t seem that enthusiastic about it’s potential, and leans more towards the hijinks of it’s money hungry explorers. The promise for something amazing is there and the movie has it’s moments, but it’s decision to centre more on the greedy bad guy cliche weighs it down. I know that this film has a loyal fanbase, but I personally see it as an okay film that came close to being something great.