Imagine if Disney made a supernatural Western about a cowboy confronting a ghost town? And it was given a badass title like “Sweating Bullets”? 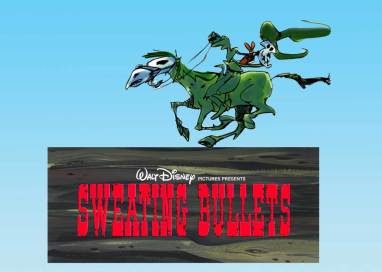 Now accept the fact that this project was almost made, but was replaced with the tale of three cows trying to save their dairy farm, aggravating huh? Well, let me introduce you to “Home on the range”. 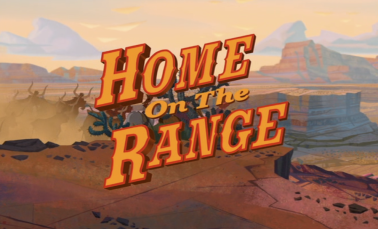 “Home on the range” follows three bovine ladies called Maggie (Roseanne Barr), Mrs. Calloway (Judi Dench) and Grace (Jenifer Tilly), whose dairy farm is in trouble with the bank. This trio of cows decide to capture a wanted criminal called Alameda Slim, in a bid to collect his capture reward money, and save their farm from the bank. It won’t be easy though, as not only does Alameda have the power to yodel cows under their control, but other folks are after the reward money too!

Oh boy, this movie is a HUGE low for Disney standards. I’d be accepting if it was just one of their straight to video babysitter fodders, but this is a major theatrical production! You’d think that Disney would have come up with something far more ambitious than something so generic, formulaic and vanilla as cows saving their farm?

Where do I even begin? Oh I know, the awful pacing! This movie wouldn’t know restraint and control if it was ironed onto it’s backside; it’s a relentlessly hyperactive movie that is always trying to make characters move, fall over or fight. The nine old men who set the standards of Disney animation, always preached the importance of pausing, and so it blows my mind that the animators are so reluctant to breathe. 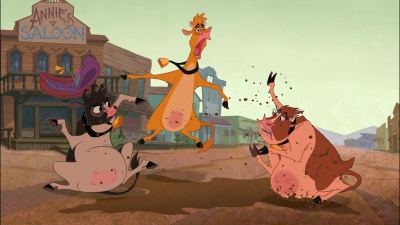 Due to this sugar fuelled level of frantic energy, the movie refuses to take it’s time, and let us get invested in what’s going on. The film jumps five scenes ahead at the start, rushing our cow heroines straight into their journey, and skimming over development of the farm we’re supposed to care about. The entire adventure lacks any substance, simply because I’m not fussed about what eventually happens to this farm. We get one scene dedicated to showing the dairy farm’s life and all we learn is that nobody gets along; some camaraderie huh? 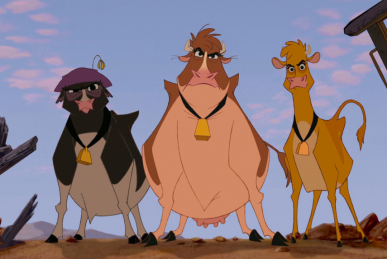 The film tries to make up for it’s lack of substance, by roughly throwing a soppy and over-sentimental country song into the middle of the film; accompanied with a scene of the farm owner sadly looking at old farm photos. Call me a monster, but I could cry more about an expired carton of milk than for this dairy farm’s plight; and that’s because the movie didn’t take the time to MAKE me care!

Another issue with the film is it’s inability to be funny, sure it got 1 or 2 laughs out of me, but it’s not as funny as it THINKS it is. It’s always winking and ribbing us, but doesn’t seem to realise that it’s jokes are falling flatter than a dead cactus, and we’re left wincing at our own silence. Most of the film’s humour lazily relies on cow puns, forced catchphrases, pop references and other corny shticks.

The cows themselves are dull as dishwater, each given a one dimensional personality that defines them for the whole film. Calloway the stick in the mud, Grace the dumb but peaceful one, and Maggie the boisterous showgirl. Sure, Calloway and Grace get a bit more confident at the end, but only because the film is drawing to a close and characters usually develop at this point; not because either character has naturally progressed throughout the shallow story. 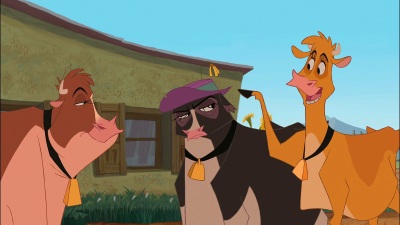 What irritates me is that these animated cattle are voiced by three super talented actresses, each with their own unique comic acting styles. They all put in their A Game, making some lines funnier than they should be, but they have oh so very little to work with as a whole. What a tragic waste of Tilly, Dench and Barr.

But none of these cows are as annoying as Buck the self proclaimed wonder horse, one of the characters that our girls have to compete with for the bounty. Yes, Buck is meant to be annoying, but his rowdy obnoxiousness is neither funny or charming. Buck doesn’t just irritate other characters, he comes off as too grating to the audience too, and I couldn’t find any humour in his over the top vanity. 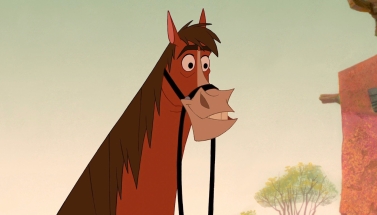 To rub further salt on the movie’s gaping wounds, the movie’s villain is your typical power hungry bad guy. Slim is basically putting farms out of business and buying their lands from auctions; while wearing a disguise that’d make Clark Kent look unrecognisable. 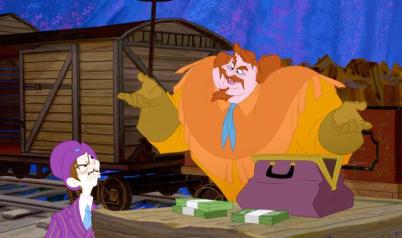 He makes for a boring antagonist, because of his unoriginal design, lack of interesting personality, and a tired old motive that’s shared with so many other Disney villains. I also find it patronising how his minion nephews are made to be unrealistically stupid, just so that he can be extra forward and outspoken about his evil plans. Movie, are these dumbass nephews meant to represent your audience? Do you really think so little of our intelligence? Wow, just wow, talk about degrading. 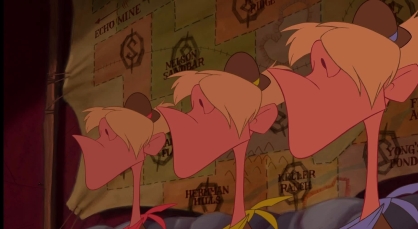 The cows’ overall adventure is way too hyperactive to appreciate, with information overloaded into our senses, and too little time spent on making us connect with anyone or anything. The film is too busy keeping every character frolicking, darting around and getting hurt; which means that we’re stuck with Michael Bay level incompetent visual storytelling.

To conclude, Home on the Range is an obnoxiously unfunny, exhaustively hyperactive and shockingly uninspired dud. It also treats it’s audience like pea brained morons, going as far as using it’s dumb villain minions as vessels for the audience themselves. Disney can do so much better than this, heck I’ve seen their straight to video department demonstrate a higher quality control! I can imagine easily entertained small children enjoying it, but it has NONE of the timeless charm or family appeal of other major Disney features.

In all honesty, this could have worked as a cute and charming slice of life sort of movie; there is something inherently quaint about farmlife. If you’ve got a very plain and minimalist film premise, then maybe executing it as something small and quiet would have worked to it’s advantage. Instead, the movie tries to make up for it’s unexciting premise, by having all the characters act like obnoxious toddlers high on illegal drugs.