The film has Akko, Lotte, and Suzy, teaming up with a bunch of Luna Nova delinquents, to hold a parade for the local town. However, Akko is annoyed at how this traditional parade held every year, makes witches look bad, and she enthusiastically decides to change it up a bit. Although, Akko’s over-excitement about the project, stresses out her friends, and brings tension between them. 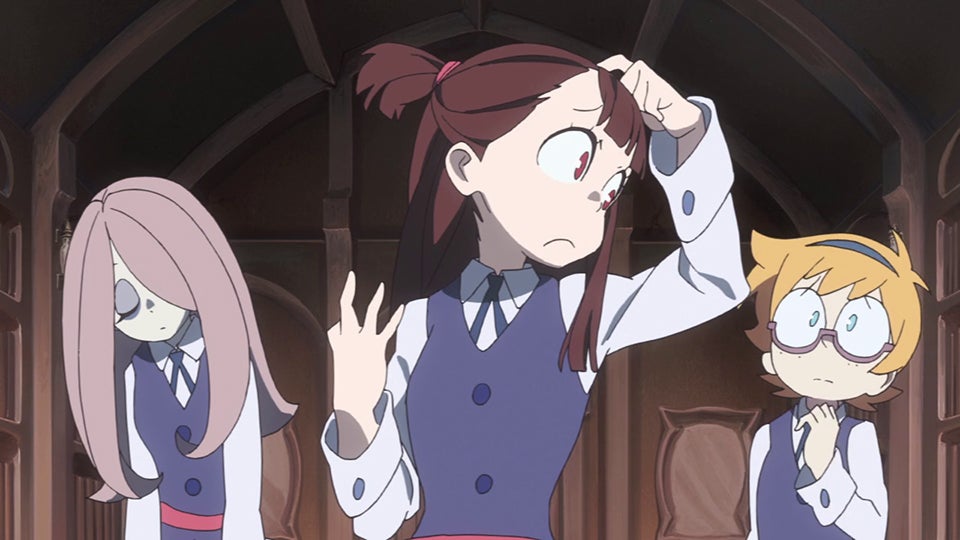 Meanwhile, the mayor wants to remove some ancient black magic stones, and replace them with a statue of himself. Little does he know, that he’s ended up releasing a Titan that was trapped away many years ago. It’s up to our witch heroes to save the day, while giving the public a great show.

Now, I felt very lukewarm about the original “Little Witch Academia short. I thought it looked pretty for certain, but the premise it introduced wasn’t exactly entirely original, and it just didn’t really win me over. While “The Enchanted Parade” didn’t convince me that this franchise is anything unique, it was certainly more entertaining than the short.

It’s kind of like a witch school take on “The Breakfast Club”, with it’s characters being forced into detention; but with the punishment of running a parade, instead of being trapped in a classroom for hours. I did like how these apparent “Bad Girls” attached to project (Amanda, Constanze, and Albrechtsberger), were actually pretty laid back students, and just different from the crowd. I was expecting a bunch of rude grumpy toughies, but these girls are very cool.

The Film also explores Witchkind’s relationship with humans, which is kind of neat, even if the non-magic users of this town are just generic stereotypes; like the cliche bullies or the corrupt mayor. I liked the idea of witches struggling to break out of their old fashioned negative reputation, and proving that they can be fun badass heroes.

The Parade itself is the film’s strongest point, with a fantastical mix of wildly weird magic, dark threat, and tense Witch VS Titan action. There’s also something rewarding about seeing the humans being won over by the witch’s spectacular feats, it makes for a satisfying climax after all of Akko’s hard work.

Little things here and there did bug me though, hence why I’m not entirely a fan of this franchise yet. I respect that the film is a milestone in independent Japanese animation, but I wouldn’t say that the end result is flawless. Just because a title is an industry landmark, doesn’t mean that it’s an inherently perfect piece of work. 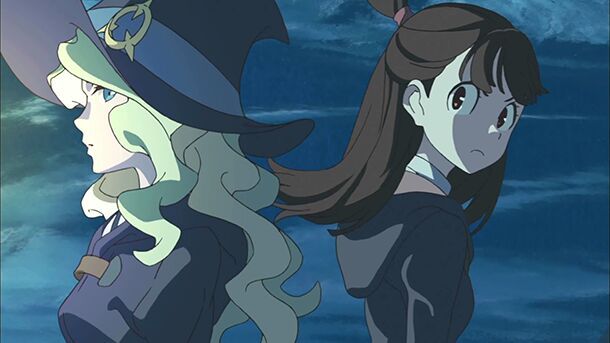 For starters, the conflict between Akko and her friends can get pretty melodramatic. It’s kind of grating, watching Akko excessively rage at her mates, and their breakup does make the characters act boringly mopey for most of the film. In all honesty, I enjoyed spending time with Amanda’s gang more, as they just had more likable attitudes.

Yes, I get that the film wanted to provide a lesson about friendship and forgiveness, but it comes at the cost of making our leads a tad annoying for most of the running time. The film does draw attention to Akko’s behavior as selfish too, but that doesn’t make the melodrama any less aggravating. I really hope that the series isn’t founded on these three constantly bickering, because I know these characters have the potential to be likable.

I also felt as if that the animation was less impressive this time, and I could even see the low budget in the production (Something that I didn’t notice in the short). Yeah, there’s a few flashy or fluid moments here and there, but most of it is pretty standard stuff. The human characters are painfully under-animated in particular, especially when there’s a crowd of them together. You can tell which shots the money went to, which results in a pretty inconstant sense of production value.

To Conclude, “The Enchanted Parade” was surprisingly fun compared to the just “Okay” short that came before it. Sure, the melodrama can be grating, and the animation lapses in quality sometimes, but I still had a very good time this round. Heck, I’d even consider watching this film again sometime!