“Pinocchio”, is Walt Disney Animation Studios’ second feature film, a fantasy fable about a wooden puppet who is brought to life, and must prove himself to be a good lad to become a real boy. Alas, it’s not an easy task, when the Naive Pinnie keeps falling for the temptations of the human world. It’s up to Pinocchio’s conscience Jiminy Cricket to help guide the kid in the right directions.

So, I’m well aware that the original “Pinocchio” novel is apparently very different to Disney’s movie, but I’m afraid that I’ve not read it, and therefore I do not feel qualified to draw comparison in this review. Instead, I’d like to discuss Disney’s adaptation as a stand alone film, and simply discuss it as a movie.

It’s been a long time since I saw this film, the last time was most likely on VHS, and that dates far back haha! Anyway, my viewing as an adult made me wonder how I managed to stomach the tonal shift the film goes through. I have to respect the film’s ability to gradually shift from bubbly whimsy to downright spinechilling horror, it’s a great way of depicting Pinnie’s slow demise into falling for dark temptations.

When Pinocchio is tricked into visiting the amusement park “Pleasure Island” and we discover that it’s young male guests are actually being transformed into donkey slaves, I actually felt legitimately sick and disturbed by the very concept! It’s made even more worrying by the fact that these unfortunate kids are never given any uplifting resolution.

I think the movie’s unforgiving vision of the downside of surrendering to unhealthy pleasures is enough to convince kids to be good. With the donkey transformations serving as metaphors for the deteriorating effects of alcohol, smoking, and other unhealthy habits. This is an unrelenting movie, one that doesn’t shy away from the realistic hazards of poor decision making, and serves as a moral lesson that parents will want their kids to learn.

It also explores the importance of not being too trustworthy, as we see Pinnie fall for a stranger’s flashy charisma, and end up in huge trouble for letting his guard down. The threat of predators remain very alive to this day, so again, it’s another lesson that mums and dads will be happy for kids to take in.

I also like that Jiminy Cricket is humanized to great lengths, to help him serve as a realistic metaphor for Pinnie’s inner conflicts. Sure, Jiminy seems very vanilla and swell, but he too can be a sucker for his own temptations (the little guy gets aroused by any female he sees, whether they are real or figurine) and he’ll often give up from time to time as Pinnie’s voice of reason. Our consciences are complex, and I feel that Jiminy is a great analogy for the intricacy of our inner voices. The movie also has a wonderful sense of humor amidst the grim storytelling, often finding highly amusing comedy in our characters naive obliviousness (Pinnie’s father Geppetto killed my stomach many times from his countless slow realisations). I don’t remember laughing much when watching this film as a kid, but I consistently balled out loud chuckles while viewing it as an adult, and maybe that’s because I can appreciate black humor more as an adult.

There’s some heart to the movie too, as Geppetto’s love for Pinocchio is the soul of the film, because you can tell he really adores his son. This is a man who has so much love to give, and he’s genuinely ecstatic when Pinnie comes to life! My insides ripped apart watching the poor old man grieving over his missing child, you can really feel his heartbreak. 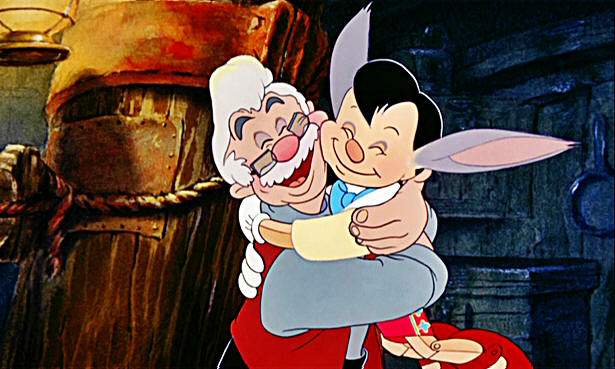 What further supports the movie, is it’s pure cinematic wizardry and technical wonder. Disney experimented with many ambitious multi-pane shots that must have blown audiences away at the time. Plus. the final conflict in the sea is jaw dropping! As it’s amazing to realise that all the water was hand-animated without computers, proving that 2D animation retains a timeless charm that can impress folks for decades after.

I will admit that I have a couple grievances with the film though. For example, I did feel as if that some scenes went on for too long, because Disney wanted to show off his staff’s character animation talents or abilities to match visuals to music. There were points where I was thinking that a scene wasn’t getting to the point, making the pacing feel like it was stumbling or meandering.

I also think that Pinnie’s character arc could have been a bit more natural, because he doesn’t seem to learn from his mistakes, and he only goes out of his way to do good once we reach the finale. I get that the point is to show Pinocchio’s gradual descent into corruption, but little hints of change would have supported his major good deed in the climax; because his final act of bravery seems to happen “Because it’s almost the end of the film”, rather than due to any organic development on Pinnie’s part.

It’s a common problem that I’ve had with the Golden age Disney animated films I’ve revisited so far, they like to pad their narratives out with interesting sequences, and then save any kind of active progression for the last minute. When watching all these old Disney classics as an adult, I’m afraid of facing the disappointment that many of them could share this same flaw.

Despite these couple of criticisms, Pinocchio is an entertainingly macabre movie with some important lessons to teach kids. The movie isn’t dark for the sake of being dark, it uses it’s harrowing realism to explore the harshness of reality. But it’s bleaker moments are broken up with a great sense of humor, this is one funny movie even though it gets disturbing at times. It’s most important achievement though, is it’s stunning technical wizardry, which deserves lots of praise.

EDIT (18/04/2019): In the years since I wrote this review, I have different feelings on the dark elements in this film, my opinions have changed. I’ve come to realise how leaving the boys to suffer as slave donkeys on pleasure island, wasn’t something worth praising, it’s actually problematic.

Yes, it shows the consequences for their mistakes, but it’s nihilistic to leave it there, the boys should have been transformed back later on, so that they could’ve demonstrated that they won’t go down the wrong path again. Without that chance of redemption for the boys, the lesson comes off as needlessly cold and cruel, especially for a film aimed towards young audiences.

Sure, we should teach kids about comeuppances for committing wrong actions, but let’s also inspire them to learn from their mistakes, we have to give them the opportunity to self reflect. Yeah, it can be exciting seeing Disney being creepy, because it shakes up their whimsical wholesome formula, and we adults LOVE seeing Disney embracing the macabre, but we should always constructively question the execution of dark elements in kids’ movies.