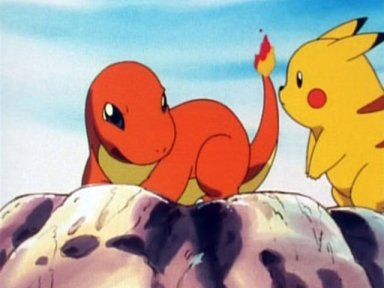 Today marks the birthday of my friend Miranda, someone who has always been very supportive of me, and I wanted to give her a review request as a present. She chose the Pokemon episode “Charmander: The Stray Pokemon”, I’m guessing this is because she loves Charmander haha!

In this episode, Ash & friends come across a Charmander with a fading flame on it’s tail, and it says that it’s waiting for it’s owner Damian to return. However, while hanging out at the local Pokemon centre, our heroes overhear Damian telling his friends that he intentionally abandoned the Charmander. Later at night, it begins raining, and our heroes bring the Charmander inside the Pokemon Centre to help it recover. 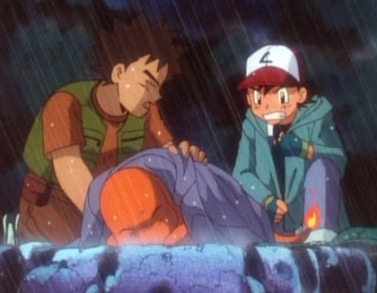 Annoyingly, this episode opens up with one of my pet peeves regarding early seasons of “Pokemon”, which is the constant moaning between Ash and Misty. Not only does their childish arguing feel aggravating, but it also gets grating hearing Misty whine about travelling, and Ash bang on about catching more Pokemon despite being lost.

This is why I favoured Brock more out of the three during older seasons, who is at his best in this episode. Brock courageously stands up to Damian at the Pokemon centre, expresses his empathy towards Charmander with the sincerest of concern, and humbly lets Ash take the Charmander by the episode’s end.

Damian is a tad silly as an abusive Pokemon trainer, he’s quite on the nose about his sadism, and 4kids even gave him a terrible evil British accent. Although, I can imagine kids finding him to be a fun villain to hate, because he stands for everything Pokemon fans are against. Plus I’ll admit that his comeuppance is pretty satisfying, considering what he’s done.

It is sad seeing an adorable little Charmander being treated so badly, but the show does go a little too far to make us feel bad for him. Not just by writing Damian as a hammy little dickhead, but also through torturing him with pecking spearows in the rain. It does end up making the episode feel melodramatic at points, and gives an unnecessary mean spirit to the episode.

Even after Charmander recovers at the Pokemon Centre, he still feels the responsibility to go and wait for Damian at his spot. It’s quite heartbreaking seeing Charmander being this loyal to a trainer that clearly feels ashamed of him. It’s also uplifting seeing our heroes still looking out for Charmander the next day, and following the naive little guy as it wanders back to it’s waiting spot.

But then the episode takes a random shift in focus, as Team Rocket burst in and make the story suddenly about Pikachu being captured. I love Team Rocket but I’ve always disliked how they can disrupt the pacing of an episode to do their shtick. Yes, their intrusions are a running gag in the show, but putting the status quo before good storytelling can hinder the pacing.

Luckily, the attention steers back to Charmander, who rescues Pikachu from Team Rocket, and saves the day. Damian happened to be watching Charmander’s impressive attack against Team Rocket, the little shit tries to take the poor guy back, but Charmander throws his own Pokeball back at Damian like a sassy badass.

I just wish that Team Rocket weren’t forced into the episode to demonstrate Charmander’s strength to Damian, when the episode could have easily just had Charmander defending himself from a random wild Pokemon instead; this would have felt more natural, kept the pace flowing, and still shown that Charmander can be strong when pushed.

All in all, this episode is a mixed bag for me. It serves as a touching origin story for Ash’s Charmander, who’d later become a fan favourite; but it can also get superfluously melodramatic, unnecessarily mean spirited, and easily distracted. Give it a watch if you want to know how Ash got his Charmander, but I can’t say that it’s one of my personal favourites.