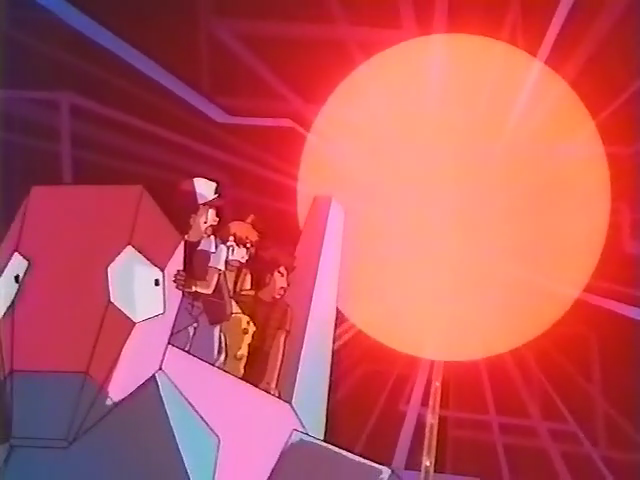 The Legend of Pokemon’s Porygon episode has been passed on from fan to fan, noted for being an episode that was banned because of it’s strobe lighting that caused Japanese kids to have seizures. The episode has Ash, Misty and Brock being sent into the Pokeball transfer system, where trainers can send Pokemon to other places and they’re assisted by the electronic Pokemon Porygon. In this electronic world, they must stop Team Rocket (Who also have their own stolen Porygon) from stealing trainer’s Pokeballs and all get out safely.

I’m surprised that it’s taken me this long to watch episode, why? Porygon is actually my favourite Pokemon! I’ve always loved it’s weird abstract design and bubblegum colours, it’s a Pokemon that always stood out to me. Seeing Porygon in action was pretty exciting to me, it’s a creature that was clearly inspired by the Polygon mesh structure in CGI models and so it’s moves, techniques and abilities are kind of like what a 3D model artist can do with a computer model. Porygon can shift shape and change texture, which helps it during battle by giving it the advantage of self-modification.

You could argue that Porygon is just a Ditto but Ditto can just mimic what it sees, Porygon can transform it’s entire body into ANYTHING at all and it’s imagination is it’s only limit. You could go as far as calling Porygon an advanced Ditto haha! Porygon also has a pretty cute cry in Japanese but I’m curious what it would have sounded like if the episode was ever officially dubbed (Rumours were made by 4Kids cast members that a dub was recorded but never released, no one has confirmed that this is true though).

Anyway, the overall episode is pretty fun, going for this sort of “Tron” style setup by throwing our heroes into an electronic world. The world itself isn’t anything special, looking like your traditional cybernetic dimension but it’s still interesting seeing the inner workings of the Pokeball transfer system.

What’s entertaining about this episode is seeing how ridiculous things keep getting! Team Rocket and our heroes battle using morphing Porygons, which is crazy enough as it is but then suddenly, a naive Nurse Joy ends up sending a vaccine into the transfer system and everyone has to escape flying missiles!

I have to say that this is the weirdest Pokemon episode I’ve personally ever seen, just because it gets so ludicrous and over the top. It’s a shame that the episode didn’t make it over to the West because I can imagine kids over here loving how silly the episode gets, plus it’s the closest that Pokemon has possibly gotten to being “Digimon-esque” due to the whole electronic world idea.

You’re perhaps wondering if this episode’s strobe lights had any effect on me? Thankfully I didn’t end up breaking out into a seizure but the flashing colours are kind of an eyesore, a bit like I’m taking a pair of red/cyan glasses on and off very fast.  In conclusion, this episode of “Pokemon” is worth a watch, especially if you’re a Porygon fan like me or you want to see one wildly weird episode haha!