In this Spongebob episode, Spongebob, Patrick, and Squidward go camping outside, but only plant their tents directly outside their houses. They hang out, play a song, eat marshmallows, and try to protect themselves from the legendary Seabear.

This is considered a classic episode by Spongebob fans. I think it’s appeal mainly comes down to how it really captures the camping spirit; without even being set in real outdoors. Our characters’ maybe only a few metres from their homes, but the episode is fantastic at creating a fun camping atmosphere by simply following the usual traditions. 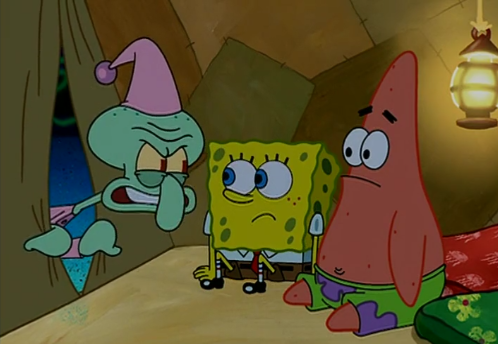 Heck, I sometimes forgot that these campers were still in the city, because the episode gets us so sucked into the campfire vibe. I can taste the sticky marshmallows, feel the warmth of the fire, and recall my own childhood memories of camping.

Of course, a lot of the comedy comes from seeing stuffy Squidward being wound up by Spongebob & Patrick’s childish behavior. Squidward boasts that he’s a camping genius, but clearly doesn’t get what makes camping so special, and that’s why the other two have are having more fun – as annoying as their antics are to Squidward. Camping is not about how impressive your tent making skills are or how brave you are for leaving home, but the magic of enjoying yourself in spite of limitations.

The thing that most fans remember this episode for, would have to be “The Campfire Song”. This song sung by Spongebob is as basic as they come, but the humour derives from Patrick keeping up with it’s simple lyrics and Squidward refusing to singalong. It’s also funny that it’s supposed to be a relaxing camping track, but it elevates into something more explosive and intense.

I did mention that the episode features a Seabear, and you read that right. At first, this creature seems to be an urban myth, and the fact that Spongebob & Patrick know it’s existence from tabloid newspapers adds to that implausibility. The silliness is made even nonsensical when we see the excessively ridiculous things that attract Seabears – as illustrated in the picture below.

However, the brilliantly genius punchline to this is that it’s a real animal, and what’s even better is that the ridiculous rules surrounding the legend are 100% true. A big part of us has been made to side with Squidward’s common sense, but the great payoff is that Spongebob & Patrick’s story is grounded in reality – making our naive childish goofballs the actual survival-savvy ones.

To Conclude, this is a laugh-out-loud funny episode of Spongebob, that authentically captures the spirit and atmosphere of camping without even trying too hard. It’s simplicity is it’s charm, like most episodes of the show, and I can’t suggest it enough as a gateway into the series itself.

Does this episode help us give a good idea of what the upcoming Spongebob spin-off show “Kamp Koral” will be like? Kind of! It does show us the sort of dynamic that the average episode may go for, but keep in mind that characters will be much younger for that series.