Mamoru Hosada’s “The Boy and the beast” follows a little runaway boy called Ren, who ends up in the world of the beasts, and reluctantly becomes the student of a grumpy warrior called Kumatetsu. You see, Kumatetsu wants to become the lord of the city, but he needs to prove that he can train an apprentice, to impress the current lord. However, he has a strong competition for lordship, as his rival Iozan desires the same position.

What follows is your usual student and teacher narrative. It’s rather cliche stuff, with your typical master learning from the pupil lesson, and sideline commentary being dished out by comic relief characters. Ren and Kumatetsu have a very volatile relationship too, which does lead to scene after scene of them tediously arguing.

Although, in spite of this, there is a charm to seeing a young bratty boy and a gruff bad tempered warrior learning to connect. Due to the tension between them, they have to depend on unusual ways of learning from eachother, and this makes for unique training sequences. Also, beneath their quarreling, there’s an unspoken respect between the two, and you can tell that they don’t know how to show it.

But what little endearment the film has, starts to fade away, once Ren grows into an adult. Suddenly, the movie shifts it’s tone, as Ren randomly decides to become a college student in the human world instead. While this does lead to a touching friendship with a lovely girl called Kaede, who helps Ren regain the years he lost while in the beast world, it drives the film away from it’s roots.

We kind of forget about this whole beast teacher & human student premise, because the movie now spontaneously wants to be a high school drama. Not to mention, with Ren wandering between the human world and the beast world on a whim, I couldn’t tell what I was supposed to be caring about anymore.

This rambling aimlessness carries on for the rest of the film, which makes the movie get kind of boring as it plods along. Sure, there’s some interesting moments here and there, but the magic of the movie’s beginning has fizzled by this point. This even continues into the finale, which is this hodge podge of exposition dumping, the reveal of a villain that comes out of nowhere, and an unnecessarily long action packed climax.

Trust me, I liked these characters enough to stay somewhat invested; but I just couldn’t get entirely worked up about what was going on, because the movie had decided to be about something else entirely all of sudden. There’s a moment in the finale that’s supposed to be gut-wrenching, but I sadly felt nothing at all.

However, this is still a Mamoru Hosada film, so I can at least praise the colourful character animation and firey battles between the beasts. The visceral emotions and bubbly energy you’d expect from Hosada’s animation is present here. His beautiful touch does leave distinctly artistic fingerprints on the film, making the confusing storytelling at least visually appealing to look at. 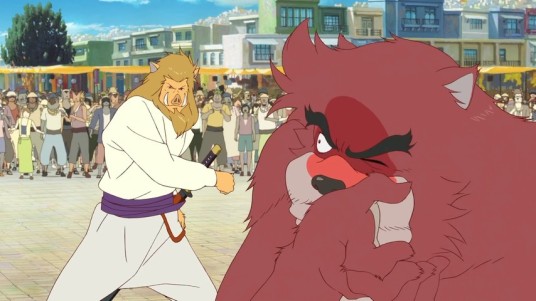 To Conclude, “The Boy and the beast” has the spark of another great Mamoru Hosada movie, backed up with his usual top notch production values, but it devolves into one big meandering mess once it reaches the middle mark. It’s like watching a director struggling to choose a film to do, so he decides to make them both at the same time. The film also come ups with way too many ideas & plotlines, to the point where it ends up feeling like they’re all scrambling for attention.

It’s far from one of the worst anime films I’ve seen though! The animation is breathtaking at times, the furious fighting between Kumatetsu & Iozan is awesome, and the characters are pretty good company; but I sadly have to admit that it’s Hosada’s weakest film to date, because it lacks the tight confidence of his other titles. I really hope that Hosada gets back on top form with his next upcoming feature “Mirai of the future“.