The Jungle Book, tells the tale of orphaned boy Mowgli, who ends up being raised by animals in the jungle, but the animals become nervous about staying, because the man hating tiger Sheer Khan poses a threat to the boy. It’s up to the wise panther Bagheera to walk Mowgli out of jungle, but the kid keeps getting distracted by creatures he meets, and the lazy wisecracking Baloo is making things worse by encouraging Mowgi to stay.

There’s certainly a likeability to this movie, a relaxing atmosphere and happy go lucky flow that creates a laid back film experience. However, I can’t say that this “Just go with it” style makes for good storytelling, because we end up with a series of random hodge podge sequences that feel like padding.

Sure, the central strife of the movie IS Bagheera trying to keep Mowgli focused, but this makes for a paper thin narrative, and it’s not enough to create something substantially cinematic. When it comes down to it, we’re just watching a bunch of comical sequences involving Mowgli messing around with random animals.

Yes, we’re frequently reminded about Shere Khan, but Mowgli’s lack of fear and easy distraction waters down this tension quite a bit. It’s still engaging seeing Bagheera stress over getting Mowgli home, but even he easily gives up bothering at points, especially when Baloo takes Mowgli’s attention.

This is another one of those Disney animated movies that feels like a hodge podge of ideas loosely stitched together, with the overall major conflict being saved for the end. Don’t get me wrong, it’s a fun bunch of scenes, but I can’t say that they all tie together to make something overall impressive.

Mowgli adds to this problem, because his lack of attention gives the movie an excuse to take things easy in the story department. Yes, it’s realistic for children to have frantic focus, and I won’t argue how much Mowgli represents an everyday kid; but Mowgli seems to heavily exaggerate the worst aspects of children, like wild hyperactivity, reckless ignorance, selfish concern, whiny neediness, and egocentric boasting. I have to say that Mowgli is quite the annoying brat in this movie, and I can struggle to like him at times.

The heart of the film is without a doubt Baloo, whose laid back flow attitude certainly fits the “Whatever goes” storytelling. It’s hard to get mad at the bear, when he’s so cool, calm, and collected. He laughs off problems, always looks on the brightside, and is full of upbeat rhythm. His affection for Mowgli is sweetly heartwarming too, because you can see how much the big guy loves the kid, and how hard it is for him to eventually do the responsible thing by the end.

But that’s not to say that Bagheera has nothing to do, his serious personality brilliantly clashes with Baloo’s laid back goofy nature, and it makes for hilarious comedy. Watching Bagheera lose his cool as Baloo smiles off the bad things, is down right funny. Plus we can see where Bagheera is coming from, and he has Mowgli’s best intentions in mind.

While the story does bob along casually, there are antagonists for our characters to face, including Kaa the hypnotising snake, King Louie the royal ape who wants to exploit Mowgli, and most notably Shere Khan the tiger. Shere Khan doesn’t make his entrance until much later in the movie, but he has a very regal charisma that’s both sinister and unnervingly charming. 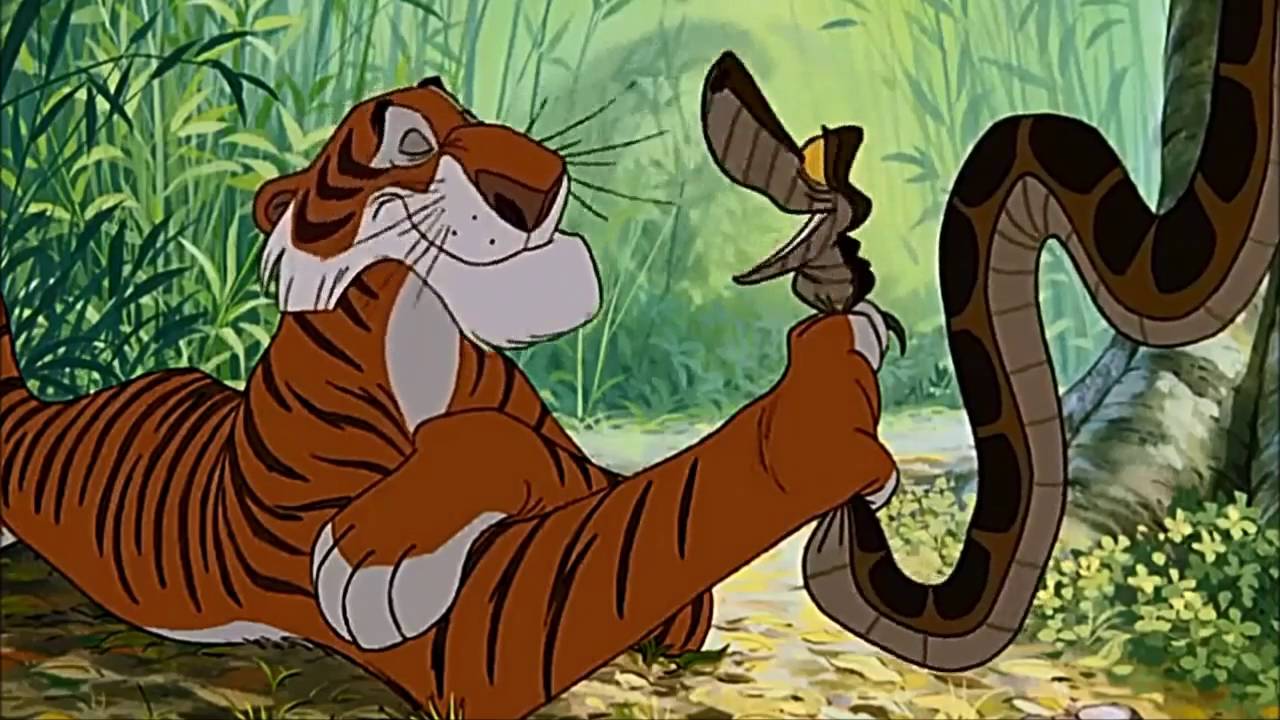 And some of these random fun set pieces are actually musical numbers, really good ones at that! No kidding, these songs manage to be hip but also timeless, and catchy but not annoying. Sure, they’re not lavish broadway style sequences, but rather chilled minimalist songs that really fit the relaxing atmosphere.

The animation is very sketchy and rough around the edges, a style that’s hit or miss for me, but actually works for a grungy jungle setting to be honest. The roughness of the harsh humid environment is supported by the sharp scratchy drawing in the animation. Yeah, I understand why this look isn’t for everyone, but at least it doesn’t look unfinished like “Robin Hood”.

To conclude, “The Jungle Book” is a tranquil, funny, and cool movie, with some likeable talking animal characters and entertaining songs. Is it a classic masterpiece? I personally don’t think so, because the weak scattered storytelling hinders it from being something outstandingly solid, but it’s still a fun watch.

This was actually the last movie that Walt Disney himself supervised, is it a good swan song? Well, I have to say that his career didn’t end with a bang, but it also didn’t finish with a whimper…. more of a quiet uplifting goodbye.