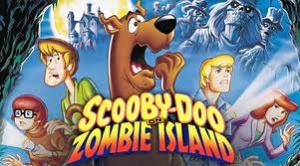 “Scooby Doo on Zombie Island” is the first of many straight to video animated feature films based on the classic Hanna-Barbera cartoons. It follows Scooby, Shaggy, Daphne, Velma and Fred, as they explore a New Orleans Island that’s said to be haunted. What they discover is a land frequented by zombies, pirate ghosts and feline monsters. Sounds awesome right? Actually yeah, it’s pretty cool to see three kinds of supernatural monsters, all in the same movie.

However, throwing in all these sweet ideas together can’t hold a whole movie together unless there are many other high qualities, most importantly the story. To be honest, the execution of this film is a mix of follies and successes so that’s why my opinion is split.  It’s paranormal set pieces don’t kick in till half an hour into the movie but this doesn’t mean that the first act is dull, hell no, we get to see our mystery investigators slowly settling into New Orleans and the spooky setting of Moonscar Island. The buildup is excellent, we don’t rush into the horror element of the movie, we are made to feel comfortable at first and that’s fantastic. The final reveal that shows the truth behind the island isn’t exactly surprising (“Scooby Doo” isn’t exactly remembered for it’s ability to plant red herrings) but it’s an interesting twist to say the least.

Most Scooby Doo cartoons are charmingly cheesy and remembered for their goofy monsters. The original Hanna-Barbera series was very tongue in cheek and crudely made so I was shocked to notice how much “Scooby Doo on Zombie Island” had stepped up a notch from it’s source material. This is a children’s cartoon, so obviously there’s no hyper violence, but for a Scooby Doo movie, these zombies do look relatively threatening and scary. We’re used to this franchise’s monsters being badly animated rubber masked plonkers so I was genuinely surprised to see some rather intimidating living dead creatures. Sure, they’re not dripping with blood or rotting with graphic wounds but they certainly don’t look like your typical wacky Scooby Doo monster.

In fact, this is actually a mature piece of horror fiction that respects it’s young audience. It’s not afraid to have some well executed scares without softening it’s presentation and that’s the ideal approach to children’s horror. Many kids do enjoy the adrenalin of fear, I mean scary stories were an essential practice in boy scouts for me, so film makers shouldn’t have to assume that they have to avoid being frightening when making horror fiction for kids. “Scooby Doo on Zombie Island” has to be a perfect example of how to introduce the genre to younger audiences.

Scooby and Shaggy are usually the show’s comic relief but they’re neither funny nor enjoyable as a presence in this movie, they are actually a nuisance if I’m honest. The film repeats the same three scenes: Scooby and Shaggy scream for help, Scooby and Shaggy eat Chilli Pepper then scream or Scooby chases Cats. These three scenes happen over and again as they generate a sense of Deja Vu. This movie’s major problem is that it tries to pad out it’s running time with repeated fillings and that wouldn’t be as bad if these paddings were all different, but they’re not. The film’s story contains such ideas as curses, voodoo and tourist zombies so it doesn’t need to waste it’s running time with looped comic relief scenes. If the writers used their imagination then they could have used this extra time to develop characters, create a creepy atmosphere or build tension.

While Fred is his usual cardboard self, lacking any personality or character identity, Velma and Daphne are given some much deserved recognisable personalities. In this movie, Daphne is depicted as an energetic news reporter that’s determined to document a real haunting and she’s relentless to make it possible. Now, while that’s not exactly a complex character portrayal, it’s certainly a more interesting step up from her trademark damsel-in-distress role. Velma is given a bit more spark, she’s more than a smart kid trope as we see her being surprisingly gutsy and tough as she uses her wits to challenge or monitor her suspects.

The music for “Scooby Doo on Zombie Island” is a mix of creepy ambience, dramatic orchestral pieces and interestingly, traditional Cajun music that incorporates a strong use of the accordion. The animation is slightly above the efforts put into episodes of the original 60s cartoon but most of it’s character movement isn’t anything impressive. Most of the animation effort goes towards action set pieces and some slickly animated transformation sequences. The voice cast is really interesting though, with Futurama’s Billy West doing a brilliant Shaggy impression (had no idea it was him at first!), Daphne is played by the late hyper talented Mary Kay Bergman (who sadly committed suicide a few years later after this film) plus we get some star turns from the wonderful New Orleans native Jim Cummings, the underrated Mark Hamill and an unrecognisable Tara Strong.

To conclude, “Scooby Doo on Zombie Island” is plagued with pointless filler, but it’s not afraid to embrace the horror genre and it gives a little bit of depth to it’s lead female characters.