Steve Rogers is a scrawny young man with a desire to join the army, but his constant attempts to enter are consistently denied, but all that changes, when he’s picked to be the guinea pig for an exciting “Super Soldier” experiment, and undergoes a scientific transformation. At first, the military don’t know what to do with him, except make him serve as the mascot of a propaganda campaign, until he decides to prove himself as a soldier, by personally taking on the threat of a cult called “The Hydra”, and defeat it’s leader Johann Schmidt – who is using the legendary Tesseract of the Norse Gods, to create powerful weapons.

The story for this film is far from anything special, your typical underdog trying convince his stuffy peers that he’s a worthwhile hero, as a a dangerous villain attempts to dominate the world; it’s a staple of Hollywood film formulas. Not helping the unoriginal narrative, is the pacing,  as the film takes it’s sweet time to get to Steve donning the suit for super hero purposes, something that doesn’t happen until half way through this two hour movie. Yes, until then, we get a glimpse into the industry of American wartime  propoganda, but the film doesn’t seem that interested in exploring behind the curtains of the Cap’s heavily staged campaign.

However, the 1940’s inspired aesthetics, help to set the film apart from other MCU entries, and give the story some period charm. Not to mention, the inclusion of fantasy science, does provide the movie with a chance to blend Norse mythology with cyberpunk technology, and this makes for some inventive action sequences that pit the physically strong Steve against Schmidt’s explosive laser weapons. I also can’t get enough of how Steve uses his Vibranium shield to his advantage too, whether he’s knocking enemies down from trees, or using it for defence against dangerous fires.

Like many Marvel Cinematic Universe films, it’s our hero that holds the movie together, with Steve Rogers’ Captain America. I don’t think I actually truly appreciated Steve as a character until seeing this film, as his origin story shows his Patriotic roots, and how he was burning with a desire to protect people even as a skinny weakling. I can’t help but feel inspired by this character, he is relentless in his ambitions to defeat evil, and his morals are movingly honorable. 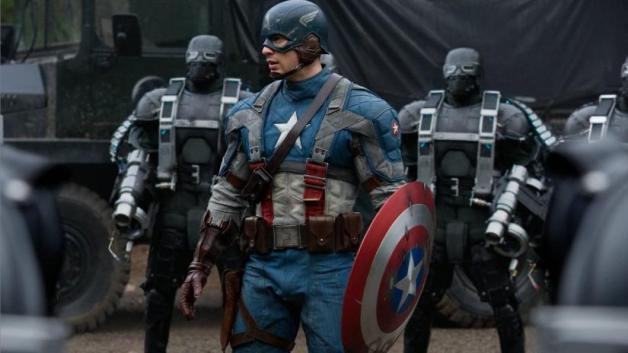 The Cap also gets his own romance, in the form of Agent Carter, a high ranking military officer who is one of the rare people to see hope in Steve, and believes that his newfound physical enhancement can be put to good use. Although, she’s no token female love interest, she’s a woman who has worked hard to reach her rank, with no fear about putting her male colleagues in line, and that includes Steve.

The romance between Peggy and Steve is kind of adorable, thanks to it’s old fashioned innocence, and there’s some cute playful chemistry between them through analogy of dance. I also like how this romance doesn’t dominate the film, serving as a tense subplot for the most part, as the movie lets these two be their own characters, before letting the two express anything directly.

But Peggy isn’t the only special person in Steve’s life, as his close soldier friend Bucky, is also important to him. Bucky has an affectionate friendship with Steve, one that’s full of loving protection towards eachother, as well as honest truthfulness when giving advice. Having being already spoiled by where things go between them in future installments, I’m curious to see their story progress, and wonder how it’ll eventually lead to the events in “Civil War”. 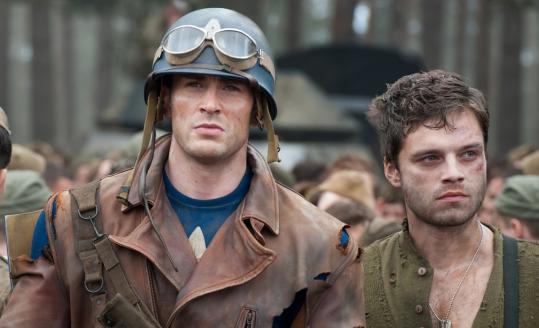 Then we have our villain, *long exhausted yawn*, who is your tired old scary faced bad guy who wants to take over the world, and become the most powerful force against humankind. Yes, you can make a contrast between Steve and Red Skull, as Schmidt is the result of the same experiment, but he disfigured into a monster, and is using his gift for evil; although that doesn’t make him any less boring as an antagonist. Hugo Weaving is renowned for bringing creepy villains to life, and while he really sells the red skinned sinister make up, not even he can add any kind of unique charisma to this flatly written baddie. 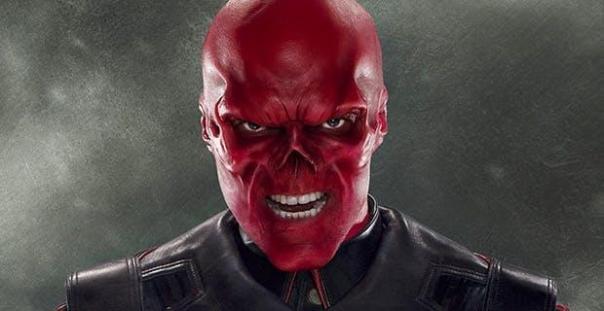 To conclude, “Captain America: The First Avenger” is an action packed war movie about the simple tale of an under-appreciated good guy fighting evil, but it’s interesting seeing fantasy science being brought into this era, Agent Carter shows promise as a heroine in the MCU franchise, and Steve Rogers makes for an inspiring patriotic hero. It’s certainly a film that’s helped me further admire the appeal of the Cap, but I wouldn’t say it’s a remarkable Hollywood movie, because it doesn’t have very imaginative ambitions as a story.

Posted on April 27, 2018, in Uncategorized. Bookmark the permalink. Leave a comment.