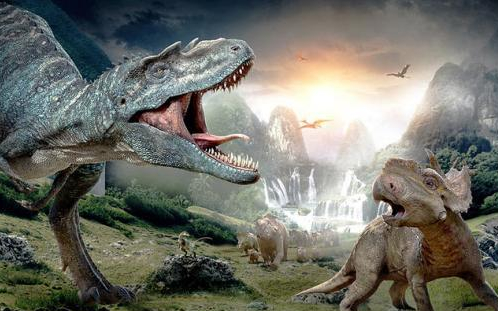 Based on the BBC TV documentary series “Walking with dinosaurs”, this film follows a Pachyrhinosaurus called Patchi (the pinnacle of imaginative naming right there), who is the son of the leader of his herd, and has an egotistical brother called Scowler. After trying to defend his offspring, Scowler and Patchi’s father is killed, so Scowler ends up working up the ranks to become the new leader. Scowler not only humiliates his little brother, but also steals his love interest Juniper, and leads the herd into dangerous directions.

Urrrrggh, that’s time I’m not going to get back, what a rubbish piece of dino dung! This movie brings nothing worthwhile to Children’s cinema or the art of edutainment. While the film will sometimes stop to provide the audience with facts about dinosaurs, the filmmakers did NOT have confidence in kids’ ability to enjoy learning, focusing more on a run of the mill sibling rivalry story with a generic “finding courage” message, and featuring dinosaurs who don’t know how to shut the hell up. The film is a constant string of verbal diarrhea, with annoying characters spouting non-stop dumb jokes or generic Hollywood one liners, and silence is a bloody damn miracle when it happens.

Great kids’ movies respect that children are capable of patiently reading visual storytelling, or believe that they can at least develop the ability to do so, but this movie? It has no respect for young people’s intelligence, depending WAY too much on juvenile humour and TWO narrators to keep kids engaged. So many scenes that require somber or serious moods, are drained of all credibility, when the goofy cheesy dialogue dominates nearly every scene, and tearjerker moments are turned into comedic sketches.

The dialogue doesn’t even match the visuals! Not just because it intentionally doesn’t sync to the dinosaurs, but the cartoony style of voice acting is BEYOND unfitting against hyper-realistically rendered animals, creating this weird uncanny valley that’s pretty distracting. What’s even weirder, is that not all the dinosaurs talk, some just stick to grunting or roaring, and the film isn’t even particular about which characters can or can’t talk.

Even when you mute this film, it’s STILL annoying, because the visuals are catering to the dialogue’s timing,  making the pacing rather unnatural, and so there goes any way of finding this movie tolerable through an alternative silent cut. You know what really bugs me? If the filmmakers actually embraced it’s photo realistic animation, stuck to a mature tone, ditched the rambling noisy dialogue, then this film could have been at least watchable, not amazing, but at least tolerable to sit through.

I say this, because as annoying as the film is, I can’t deny how much effort has gone into the overall presentation! The beautiful live action backgrounds, vividly rendered dinosaurs, and grand bombastic music, all lend to a promising movie about the majesty of a time before our own. Films that squander their potential are pretty shameful to me, because they abuse what hope they had, trading integrity or creative risk taking for easy pandering, and all that could have been is sadly lost.

To conclude, I’ve rarely had headaches before in my life, but this movie gave me one, and I kept needing to recover my thumping skull with frequent drinks of water. This is a patronising film featuring annoying one dimensional characters, who seem to think that their beaks or teeth will explode if they stop talking, and star in a story that lacks any inventiveness or inspiration.

NOTHING about this movie sets it apart from other children’s dinosaur films, plus the educational value is downplayed out of fear of boring kids too much, and you shouldn’t expect much substance or originality from it’s story or characters. Sure, the visuals are breathtakingly gorgeous, and the music can be awesome sometimes, but it’s hard to appreciate these stunning elements under all the forced rattling dialogue. Unsurprisingly, all these yapping voice overs were a last minute decision by FOX, and you tell that they’ve all been tacked on! It’s like watching a really bad movie dub by unfunny comedians.

Posted on May 18, 2018, in Uncategorized. Bookmark the permalink. 4 Comments.