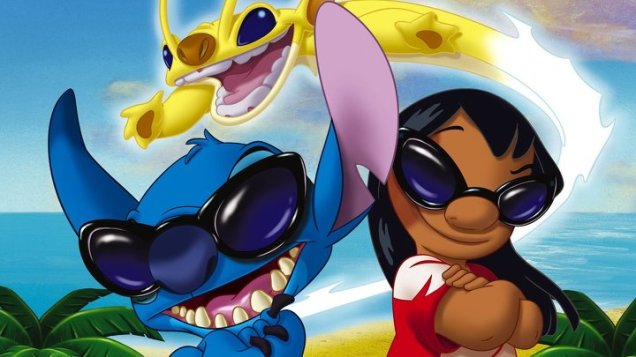 In this straight to video spin off to Disney’s “Lilo & Stitch”, we discover that Jumba has been secretly hiding the other 625 experiments, in the form of little tiny pods, and they can come to life once in contact with water. Jumba’s former colleague Dr. Hämsterviel, kidnaps Jumba with help from ex-galactic federation captain Gantu, and tells Lilo & Stitch that they’ll need to send all the other experiments, or they won’t see Jumba alive. There’s one big problem though, Lilo & Stitch already dehydrated a pod for an electricity experiment (that Lilo names Sparky), to help them recharge their spaceship, can they find it in time for the ransom delivery?

Despite it’s title, this isn’t actually a movie per se, but rather an hour long pilot for the “Lilo & Stitch” TV series, so those expecting a cinematic Stitch-centric film maybe disappointed, because the focus is on setting up the television show. As a TV pilot, it does it’s job fine, introducing the elements that’ll dictate the formula for every episode, letting fans know what to expect in the long run.

The film might have very high stakes, but it goes for a fluffy light tone, treating the kidnapping as more of a comedic farce than a genuine dilemma. Sure, the first film was pretty wholesome and laid back, but it would know when to take tension seriously. Of course, the comedy provides some decent zingers, but the jokey nature of the storytelling also downplays the severity of Jumba’s kidnapping, and that makes the Sci-Fi Adventure aspect less exciting. 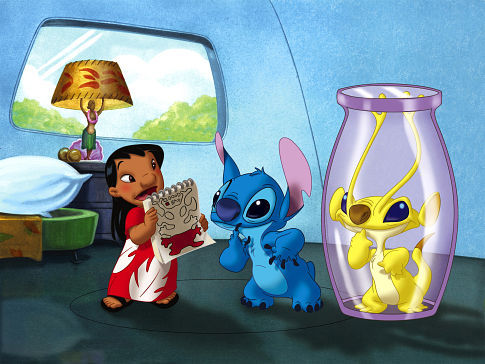 However, once our heroes meet Hämsterviel for the ransom exchange, the film gives the action & drama more weight, pressuring Lilo to choose between saving Jumba or protecting the experiments, and the Galactic Federation even step in to amp things up. This finale is the movie’s strongest act, as this is when the tension rises, with our heroes being put in a tight spot, and the villains are given the upper hand, but I do wish that the film had the same gravitas in the first 40 mins.

The animation is nowhere near as good as the first film’s, but that’s to be expected from a straight to video production, and it’s at least easier than eyes compared to the cheap looking TV Show. Don’t expect to see exotic visuals as pretty as the original film’s either, because the film doesn’t have much interest in capturing Hawaii’s atmosphere, preferring to get on with the story in hand, which is sad, because Hawaii is what makes this franchise so unique. The comedy is sorely let down by the standard level of animation too, seeing as characters are being limited in expressiveness, so many comedic sequences aren’t as funny as they could be, because the character animation lacks pzazz. 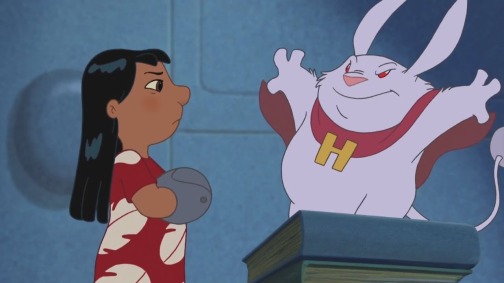 To Conclude, “Stitch: The Movie” bumbles along at the start, treating it’s high stakes with little dignity, but once we draw to the final act, the excitement kicks in, and we can finally get invested in the drama. It’s also nice to see the film carry on the original’s message about family, by having Stitch discover the revelation that he has relatives, and our heroes get to defend their right to live (Oh and it’s super cute seeing Stitch meet his cousin Sparky). Hämsterviel makes for a great comedic antagonist too, with his colourful insults and bad temper; he would go on to make for an entertaining running foil in the TV series.

As a film, it’s an okay effort for a Disney straight to video release (I’d watch it over Hunchback 2 or Belle’s Magical World any day), but it’s main strength lies in how it sets up the TV show, as that’s it’s main purpose after all. If you want to see where the “Lilo & Stitch” franchise goes after the first film, it does help to see this entry; it’s not crucial viewing, but it fills in the gap before the TV show and final film.

Posted on October 5, 2018, in Uncategorized. Bookmark the permalink. 7 Comments.