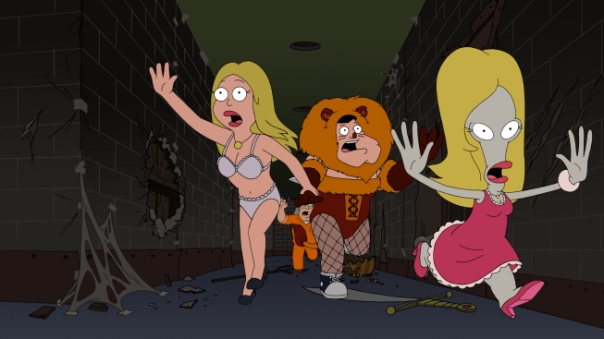 In this episode of American Dad, it’s Halloween in Langley Falls, a time when Stan can boast about having the best haunted house, but it’s different this year, because his neighbor Buckle is hosting one hell of a spooky home. Buckle’s house is so scary, that Francine pees herself, is convinced that Stan can never compete with their neighbor, and wants to spend the Halloween night at Buckle’s. Disappointed that his wife won’t support him, Stan turns to Roger, who tells Stan to make his haunted house more real, and this inspires Stan to put actual serial killers on display in his home. Meanwhile, Steve is taking Akiko out trick or treating, promising her brother Toshi to have her back by sundown, but Steve has plans to woo her instead. 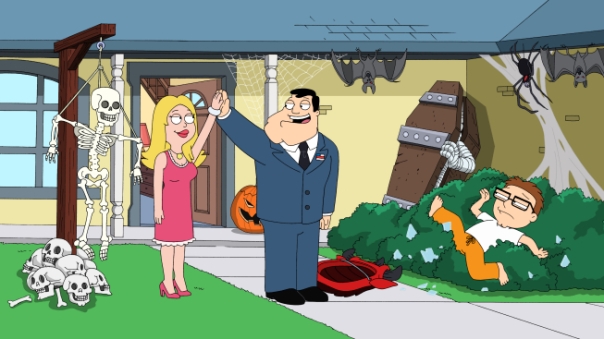 This is a really fun Halloween special episode, a black comedy nightmare for fans of the sci-fi sitcom series, with a great mix of big laughs and creepy horror. One thing I love about it, is that we never get to see Buckle’s haunted house indoors, the experience is told by a shaken Francine, leaving the visuals to our imagination, and this actually makes me wish we COULD see it. We do get to see the outside of Buckle’s home though, which makes the interior even more enticing, because the entrance is so imaginatively wild, and it’s cool to learn that Buckle used to be a Disney imagineer. 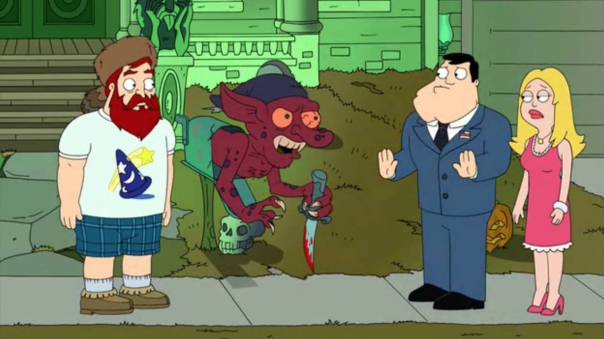 The serial killers themselves make for menacing villains, they maybe kept behind glass for most of the episode, but seeing them respond to a stripped down Francine shows that they are disturbingly dangerous, and a part of us is curious what havoc they’ll cause once out. After Francine confesses that the serial killers don’t scare her, because they are caged up, Roger resorts to freeing them, turning the Smith house into a death trap for guests, this is when their personalities start to come out more, and they suddenly pose as legit threats. There’s an entertaining horror to seeing innocent people scramble around the house, as serial killers prowl around the hallways, especially when some people don’t realise how screwed up these monsters really are, but that’s kind of blackly comical too.

The subplot involving Steve and Akiko is awkwardly cute, with Steve being embarrassingly nerdy, as he tries to play it cool in a Go-Bot costume, but Akiko doesn’t seem to mind his geeky nature. There’s something kind of romantic about them both running from a sword wielding Toshi, into a quiet peaceful secret place, where they swim together into a pretty cave, it’s a nice contrast to all the brutality outside the date. Eventually, Toshi does catch up to the two, but Steve stands up to him, Toshi realises that he’s been too overprotective, and he ends up becoming the episode’s hero by slaying all the serial killers. Although, Akiko hilariously turns down Steve, admitting that her real crush is on a 9 year old boy who can dance good. 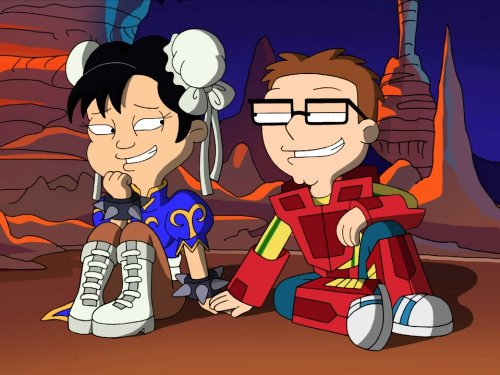 To conclude, this is certainly one of the darker episodes of “American Dad”, which is perfect for the Halloween spirit, but it also has some decent messages about treating loved ones, from supporting them rather than doubting them when things get tough, to not overprotecting them once they are old enough to look after themselves. If you’re a fan of adult animated comedies, want a spooky special episode of one, then add this to your Halloween watch list.

Posted on October 31, 2018, in Uncategorized. Bookmark the permalink. 11 Comments.