This fourth annual Halloween special episode of “The Simpsons”, tells three spooky but silly stories, and I’m going to review each one. The great thing about this episode, is that it was made back when Treehouse of Horror tales had fun wraparounds, which did make stories shorter, but it also made for fun inbetweens, and this one has a great wraparound! As each story is introduced by Bart in an art gallery, each painting serving as a title card for a scary segment, it’s both very creative and faithful to the spirit of Treehouse of Horror.

THE DEVIL AND HOMER SIMPSON

In this first tale, Homer sells his soul to the devil in trade for a doughnut, but Marge refuses to let Homer go to hell, and demands for a trial. I love the funny twist that Ned Flanders is really the devil, it adds this creepy theory that Ned’s extreme religious faith is a rouse, while he goes undercover as Satan in the world of humans, even Ned himself says “It’s always the one you least expect”, and we have seen Ned’s dark side before in episodes like “Hurricane Neddy”. Not to mention, hearing the devil spout Flanders’ trademark whimsical diddlies is a delight, making him a very amusing take on Lucifer.

The episode’s depiction of hell is always a treat, finding the right tone to suit the show’s universe, a place that’s menacingly nightmarish but also a tad goofy, with torture concepts like forcing Homer to eat all the doughnuts in the world, which backfires on Hell’s minion immediately. Then we have the trial, which includes a gallery of historic rogues as the jury and Lionel Hutz serving as Homer’s incompetent lawyer. With the Simpsons living room as the courtroom, the villains comically struggle to find chairs to sit on, demeaning these intimidating figures to hilarious levels, and Hutz finds escape in the home’s bathroom window.

The segment concludes with a very sweet resolution, in which Marge reveals that there’s evidence that Homer originally pledged his soul to Marge forever, which not only saves his ass, but also shows that there is some compassionate love behind Homer’s greed, and it’s rare that a Treehouse of Horror story gets sentimental like that (even if Homer is left with a doughnut head). This is a very funny devil’s deal story, with lots of standout gags and a lovely twist ending.

This second segment is inspired by the Twilight Zone story “Nightmare at 20,000 Feet”, it’s about Bart seeing a Gremlin on the school bus, but no one believes him. It’s Skinner’s frustrations with Bart’s claims that carry the episode, as he keeps denying the Gremlin’s presence, putting his concern over Bart’s unruliness over the potential threat of a monster, even after seeing the carnage at the end of the bus ride, and it’s hilarious how stubborn he is being.

We do sympathise with Bart, as we can see that a Gremlin is clearly there, but it keeps vanishing when others gather to see it, and it’s darkly comical to watch Bart lose his mind trying to convince the others. Even his best friend Milhouse abandons him, making him even more alone, and we end up sharing his panic. Bart has had a record of causing trouble, so this history of delinquency has injured his reputation for telling truths, a bit like when he had that The Boy who cried wolf plot in “Marge gets a job”.

The Gremlin itself has a Gollum-esque design, making him both cute and intimidating, which helps to give him a memorable personality. He even ends up being rescued by Ned Flanders, but that doesn’t calm him down, because Flanders ends up becoming a victim, letting us know that buses aren’t the only things he will destroy. This is a classic Treehouse of Horror story, with a lovably creepy villain and great use of the Skinner/Bart dynamic.

This final segment is a parody of Francais Ford Coppola’s film adaptation of Bram Stoker’s Dracula, with Mr. Burns in the role of the vampire. Now, I’ve not actually watched Coppola’s Dracula, so I’m the best person to ask if this story is a great parody, but I still enjoyed it nonetheless. There’s lots of comedy to come from Lisa’s frustrations over convincing her ignorant family that Burns is a vampire, as they naively brush off her accusations, and act like Burns’ undead quirks are normal traits. It’s also funny to see Homer being given the task of slaying his boss, conflicted between heroic duty and his need to keep a job. 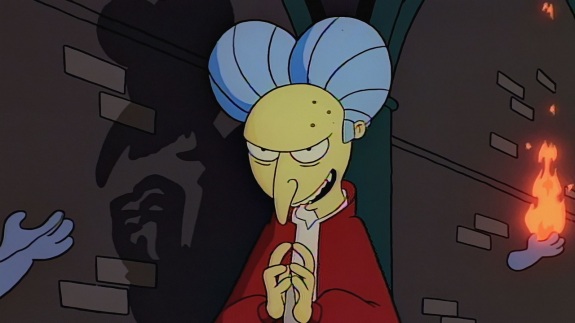 The episode also has lots of atmosphere, with everything being framed like an actual vampire movie, from the creepiness of Burns’ castle to the way Burns moves, which helps to sell all the jokes, because the tension is mimicking the grandeur of a serious Dracula adaptation.  It’s what makes the work of Monty Python and Mel Brooks so great, they replicate the things that they are parodying down to a tee, to effectively subvert the very product that they want to satirise.

I always got excited when this story came on TV, because it had all the appeal of a vampire film, tapping into my childhood fascination with the lore of vampires, it stood out from most stories, because it went all out with the love for traditional horror. I also found a spooky charm to seeing kids floating outside Lisa’s window, tempting her to become one of the undead, it resonated with my fantasy about becoming a vampire, at an age when I thought that they were so cool.

Posted on October 29, 2018, in Uncategorized. Bookmark the permalink. 2 Comments.