The upcoming Elton John biopic “Rocketman” has been given a new trailer that expands on the film. It shows off Taron Egerton’s take on John, his relationship with lyricist Bernie Taupin, the singer/musician’s fabulous stage shows, and his childhood in Middlesex.

I’ve always been a huge fan of Elton John, not just his terrific songs, but also his wildly colourful stage persona (I wish I could have a wardrobe like his), so I’ve been interested in this biopic since it’s teaser. This new trailer gives me even more hype in the film, because it seems to be faithfully resembling the charisma of Elton, warts and all, not shying away from the man’s diva tantrums. 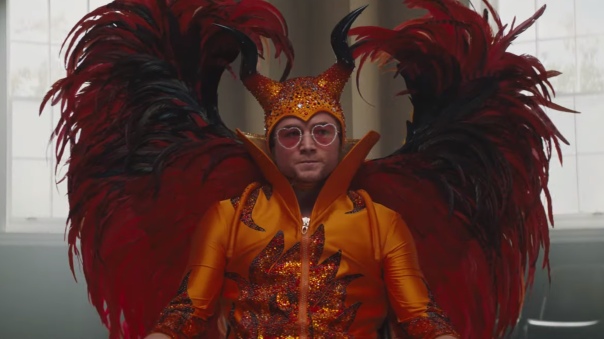 Taron Egerton may not be a perfectly exact replica of John, but that doesn’t matter when the actor seems to be nailing the spirit of the rockstar, he’s really sinking his teeth into the role in the clips we’re granted to see. Jamie Bell seems to be bringing some down to earth sensitivity to his Bernie Taupin too, a great contrast to the loud boisterousness of Egerton’s Elton, I look forward to seeing how both actors will bounce off each other.

More than anything, I’m super excited to see how the film pulls off the stage shows, that’s when Elton really shined as a character, this trailer gives us lots of clips from this aspect of the film, letting us see the campy glittery costumes in all their glory, as well as Elton’s love for putting on a performance even when he looks ill.

Many folks have been comparing this film to last year’s “Bohemian Rhapsody”, the biography of Queen’s Freddie Mercury, but I can’t support this comparison as someone who hasn’t seen that film. It’s natural for both rockstars to have similar style biopics though, as not only are they both British, but they also share the same kind of magnetic stage presences (which one stole the audience the most is up for debate), and interestingly they happened to be good friends back in the day.

Rocketman hits theatres on May 31st, here’s the trailer itself:

Posted on February 21, 2019, in Uncategorized. Bookmark the permalink. Leave a comment.