This “Black Mirror” story is set in a dystopian future, in which humans are paid in merits to power the world’s electricity through pedaling, but the mundane living doesn’t stop there, because they all also come home to rooms where the walls are monitors, and everyone is forced to watch adverts or pay fines if they stop viewing. We centre on Bing, one of the rare people actually sick to death of this place, with a longing to feel some sense of reality, but that’s hard to expect in such a world like this. 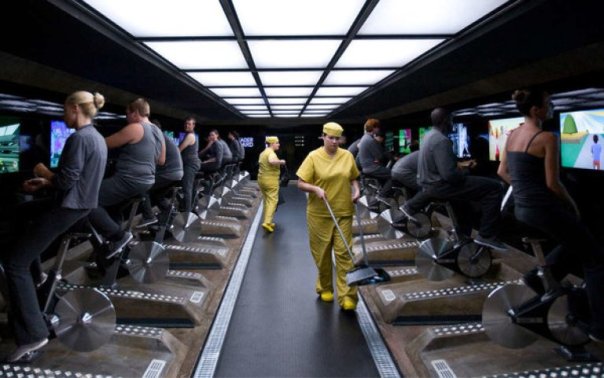 Now, this is actually the first “Black Mirror” episode I’ve ever seen, which is actually shocking when I always knew that it was my cup of tea, because I’m a huge fan of it’s creator Charlie Brooker. Plus my own stories are often centered on technophobia. One thing I will say, is that “Black Mirror” really is like an extended higher budget sketch from “Charlie Brooker’s Screenwipe”, because his ranting and raving about bad television is all over this episode.

This episode’s message is rather on the nose though, it’s not exactly subtle about the point it wants to get across or the specific kind of people it wants to attack, especially when it has a character standing on stage spelling out the intended societal criticism by the end. That our everyday lives are built on performing daily monotonous tasks to afford survival, with shallow entertainment or pointless consumerism being our only reward for living on, and the only alternative is selling ourselves out as commercial celebrities.

It’s cynical, but I get the frustration that Brooker and co-writer Konnie Huq (Brooker’s wife, who used to be a presenter on BBC’s Blue Peter) are venting. There’s an element of truth to his point of view. My issue is that the message is driven into the audience using the nuance of a foghorn, with not much left for viewers to work out themselves, as there’s a huge lack of cryptic depth to the episode’s substance. Plus the more despicable characters are more over-the-top than discreetly underhanded, thus making it hard for me to call the episode clever. Sure, the extremity of this execution is a good way to better highlight societal toxicity, because it makes the often ignored problematic undertones of television media or human interaction more obvious, but it comes at the cost of assuming that the audience can’t read between the lines themselves.

The characters aren’t exactly well developed, very flat caricatures who better represent theories, personas, or principles than real individuals; so I can’t say that they were interestingly-written. Having an hour to work with, there could have been more to them here, little extra details that made them more than just tools for the political satire. That’s not to say that I didn’t care for our protagonists, it was pretty easy to like them, mainly because everyone else in this society is either totally terrible or has become a mindless sheep.

However, the strength of the episode isn’t how it conveys it’s message or the characters we follow, but rather the the atmosphere it creates, this claustrophobic bleak corporate building where you can’t escape adverts or avoid technology. There’s something nauseating about being in this tightly small futuristic setting, not just because it’s painfully mundane, but it’s also a terrifying reflection of the cycle many of us are in right now – an analogy for those living life to the most basic standard just to get by.

While the episode is rather cruel to it’s characters, there are moments of brief hope and love, all thanks to the blossoming romance between Bing and Abi, as the idea that Bing would give up all his merits to see Abi be happy is beautiful. The fact that Bing also sacrifices his budget for food and resources, JUST to reach 15 million merits sooner, shows how passionate he is about making his voice heard, but it’s also a dark reflection of how much society asks us to give up to risk chances.

Of course, in true Charlie Brooker style, the episode ends on a bummer, because while Bing does get to protest on live television, speaking out against everything he feels is wrong, the judges ultimately see him as another cash cow, and package him as a livestream entertainer for the masses. While this is a bitter ending that highlights how even a societal protest can be rebranded for consumer use, limiting Bing to the only way he can keep his voice heard, it’s more of a wake up call than a sign to give up, asking audiences to realise how much we’re diluting authenticity in an already fabricated culture.

To Conclude, I did quite enjoy this “Black Mirror” episode, because of it’s creepily dull setting, sweet central romance, and important message about finding reality in a life without meaning. I do wish that the message was less loud and some of the characters were less cookie cutter, but there is a strong personality to the episode through it’s extreme portrayal of a media dominated society.

Posted on July 9, 2019, in Uncategorized. Bookmark the permalink. 2 Comments.