“Futurama” – The Luck of the Fryrish EPISODE REVIEW

Fry is having a series of rotten luck in life lately, with one misfortune after another happening to him – often due to his own inherent stupidity. Fry remarks that he’d never have this kind of bad fate if he still had his seven leaf clover, a charm that brought him success during his teen years, and so he ventures to his childhood home to recover it.

While in Old New York, Fry comes to learn that another Phillip J. Fry existed in his former timeline; who looked just like his brother Yancy and wore the 7 leaf clover on his suit! Could Yancy have stolen his seven leaf clover in a bid to steal Fry’s life?

While “Futurama” is renowned for it’s sci-fi comedy rooted in futuristic absurdity or techno-wizardry, it’s also the story of a young man who was whisked away from his timeline, and the show often reminded audiences of that fact. 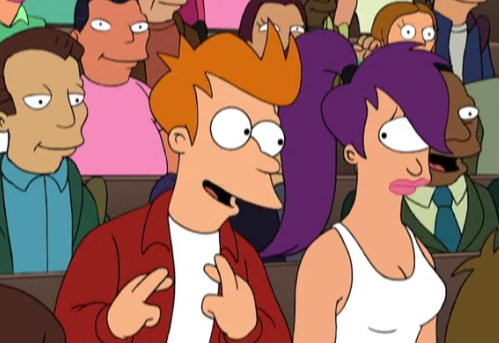 This episode really dives into Fry’s past in great detail, by expanding on his eccentric and emotionally-distant family. The show finds gallows humour in their poor parenting or American paranoia, by poking fun at Fry’s dad’s cold war fears or his mom’s obsession with sports. However, it’s also revealed that Fry’s disappearance really changed his family, as his absence created a hole in their lives.

Fry’s relationship with his brother Yancy (voiced by Tom Kenny) is troubled, because Yance had a habit of copying his sibling; much to Fry’s frustration. This is mainly just teen angst and sibling jealousy, but there’s maybe more to Yancy’s need to imitate his brother. 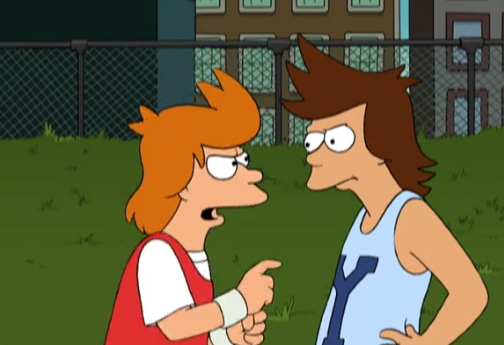 This all ties into Fry’s life in the future, where he feels like the world is against him, and that he has nothing to prove his worth. Fry, Leela, and Bender try to rob the grave of this other Phillip J. Fry, still under the assumption that he was a Yancy being a devious fraud, but then the truth is provided at long last.

It turns out that after Fry went missing, Yancy decided to name his own son after his lost brother, in a loving and affectionate tribute to the sibling he never got a chance to grow up with. It’s a really emotional twist that not only proves that Yancy was aggressively repressing his admiration for Fry, but also shifts Fry’s assumptions entirely.

Fry has come to a timeline that’s completely alien to him, from a past where he felt neglected or disrespected, and this new truth about Yancy makes him realise that he did make an impact in some way. As the episode draws to a close, Fry solemnly sits at his nephew’s grave, the clover no longer on his mind, as he tries to process how Yancy really felt and the heartbreak of never being able to rekindle what was lost.

Expressing your feelings healthily can be difficult as a confused teenager, but growing up will inevitably help a person better translate their raw emotions. Unfortunately, Yancy didn’t mature until Fry became absent from his life, so he had to grieve over his brother while also accepting the rift he created between them as teenagers.

This is what makes the ending such a tearjerker to fans. Yancy’s decision to name his son after Phillip isn’t just an endearing homage, but also a message through time to an insecure man trapped in the year 3000 – letting Fry know that he has a legacy and that his family did love him deep down. 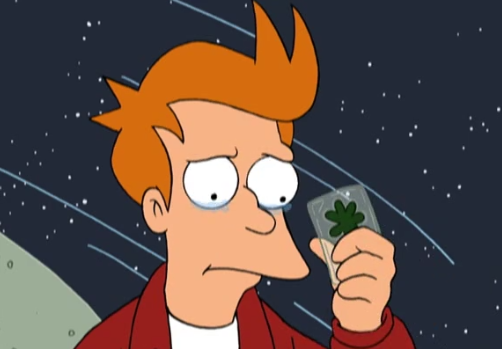 To Conclude, this is one of the more sentimental episodes of “Futurama”, but that’s why it’s treasured so much by fans! It’s beautiful message of unrequited brotherly love and finding self value in time of misfortune REALLY speaks to people.

It’s a poignant reminder to let your loved ones know you cherish them, because we tend to sometimes only appreciate someone once they leave our lives, and the memories we create can leave a lasting impression. If you hide in how your love for someone or misdirect your feelings into aggression, you’ll one day regret it when you drift apart.

WANT TO READ MORE OF MY REVIEWS? CLICK HERE!

Posted on May 20, 2020, in Uncategorized and tagged Animated Sitcom, Futurama, Sad Episode. Bookmark the permalink. Leave a comment.