Illumination Studios’ “The Grinch” is now out cinemas in some parts of Europe, but it won’t be released on the UK until tomorrow, so I’ll have to play the waiting game, but I can always finally watch Chuck Jones’ TV adaptation of the classic Dr. Seuss story! Yes, you read that right, I didn’t grow up with this Christmas Special, I just never caught it on TV, and today was the first ever time that I watched it all the way through.

“How the Grinch Stole Christmas” tells the tale of the Grinch, a green furred grump who lives in a mountain cave in the land of Whoville, always looking down on the cheery Whos with disgust, judging their happiness with spite. He becomes particularly surly around Christmas, he actually hates this holiday with passion, frustrated at all the joyful noise that the Whos make at this festive time, and so he decides to steal Christmas under the disguise of Santa Claus.

Adapting a children’s picture book can be tricky if you’re aiming for something longer than 5 minutes, but not when Chuck Jones is at the director’s helm, because this acclaimed animation filmmaker knew no bounds. Nothing in this film seems tacked on for filler or over-extended to help the special reach 25 minutes, it’s all organically played out with a faithful love to the spirit of Dr. Seuss. Jones always had a knack for bringing personality and humour to the simplest set pieces, so every scene is supported with comic energy, whether it’s the Grinch’s race down the mountain or his night of thieving.

The animation for the Grinch is deviously charismatic, as Jones lets the animation pause at the best poses, giving the audience a chance to read the Grinch’s thoughts through his mischievous face, and it’s all delightfully fun to watch. When the Grinch monologues to himself, his actions are reminiscent of a Shakespearean villain, with his broad hand gestures and visually loud expressions. There’s something arresting about watching him, he never looks emotionally stifled, he wears his evil proudly on his sleeves, and we can’t help but be endeared by his passion for ruining this holiday. 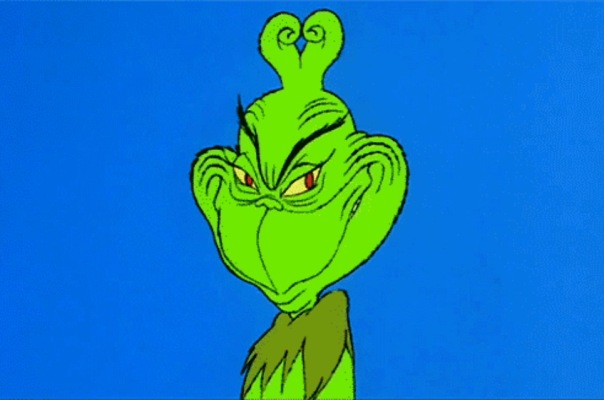 The Whos may not have much screen time, but there’s a charm to their innocence that wonderfully contrasts against the malicious Grinch, a wholesome sweetness that makes us despise the Grinch even more for his Christmas sabotage. 2 year old Cindy Lou Who, the only Who that gets any dialogue, serves as an antagonist for Grinchy when she wakes up to see him stealing from her, but also shows that the green grouch can be vulnerable when exposed for his crimes, foreshadowing his eventual turn later on. Heck, let’s not forget Grinch’s adorable pet dog Max, who is a loyal but goofy sidekick for the villain, and indicates that maybe Grinchy was once a loving man, why else would he adopt a cutie like Max?

Boris Karloff, one of the great masters of acting, not only narrates the TV Special, but also provides the voice of the Grinch. Karloff’s narration is softly tender, the kind of reading that’s perfect for a Christmas story by the fire, it’s a captivating performance that adds to Chuck Jones’ magnetic character animation, and it never takes anything away from the visuals. It’s Karloff’s voice as the Grinch that really steals the show though, he uses his background in horror to bring a malevolent venom to the Grinch, and we can’t help but smile as he sinks his teeth into the beastly Scrooge.

The film is also remembered for it’s song “You’re a Mean One, Mr. Grinch”, penned by Seuss himself, and performed by the bass singer Thurl Ravenscroft. I love this song, it’s always finding funny ways to criticise the Grinch, going into great detail to get across how much we should hate him, and Ravenscroft’s deep vocals make the singer’s character sound like a courtroom judge bellowing a verdict.

After the Grinch completes his mission of stealing Christmas, he is surprised to see that robbing all of the Whos’ material goods didn’t hinder their celebrations, as they still have the spirit to sing together in centre of their town, and they carry on like nothing of value was taken away. The Grinch has a change of heart, realises that he has done something wrong, then speeds down the mountain to return the Whos’ gifts, and they warmly invite him to Christmas in spite of what he did.

What I like about the Grinch’s growth here, is that he comes to the conclusion of what Christmas really means all by myself, no one preaches to him about shallow capitalism, he actually stops to think why the Whos go ahead with their Christmas plans, and he seems genuinely moved by their optimism. It’s like the Grinch assumed that the Whos celebrated out of deliberate annoyance towards him, when really, they were just simple happy folk who enjoyed eachother’s company, and the Grinch’s guilt over this comes off as very honest.

To Conclude, I do really wish that this special was part of my childhood, rather than the  Jim Carrey adaptation from 2000, because this version is far more sincere and wholesome, plus Karloff’s Grinch has an endearing nuance to it. If you’ve never seen it before, maybe check it out before watching Illumination’s take on the Dr. Seuss book, or perhaps save it for a nice Christmas afternoon with some eggnog and mince pies. I’m nervous about seeing the Illumination version now, because this short is just so perfect as it is, I don’t see how another animation studio can improve on it or compete with it, but we will have to see.

Posted on November 8, 2018, in Uncategorized. Bookmark the permalink. 5 Comments.