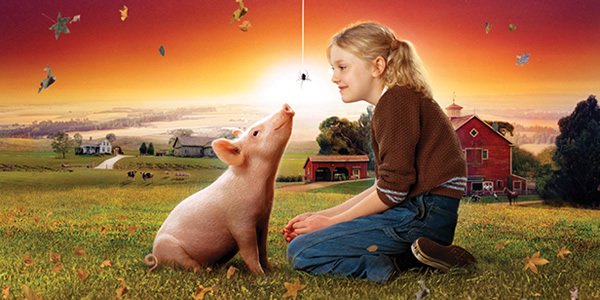 When Fern’s father almost kills a runt piglet, she volunteers to become it’s carer, naming the little piggy “Wilbur”, but her fostering comes to a close when she has to sell the piglet to her Uncle Homer, who plans on eating him for Christmas. While living in Farmer Homer’s barn, Wilbur befriends a gentle spider called Charlotte, the eight legged critter promises to save the piglet, by using her web weaving skills to highlight Wilbur’s worth to humans.

I did read the original “Charlotte’s Web” book, back when this film was released in fact, but it’s been more than a decade since then, meaning that my memories of the book’s content have faded, so I can’t give any verdict on this film’s merits as an adaptation. There might be criticisms in this review that also apply to the book, I obviously won’t know, but it’s important to remember that a book isn’t a sacred text that filmmakers HAVE to copy & paste, improvements can be made during adaptation. 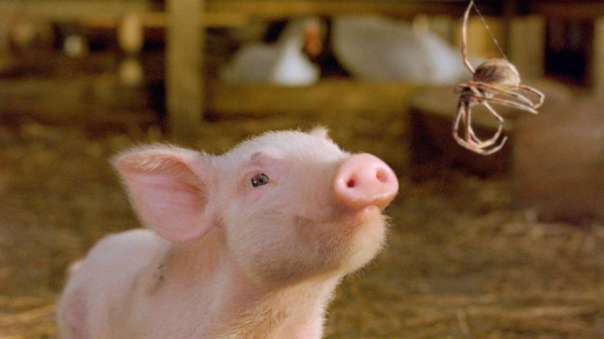 Anyway, this a cute movie, one that doesn’t exactly stick out from all the other talking animal movies of the 2000’s, but it’s a decent effort regardless, a sweet well meaning film that does seem sincere about introducing young audiences to the grim side of farm culture. The smokehouse, for example, is always framed as this sinister haunting little shed with black burn marks, never letting us inside, it’s this nuance that adds to the building pressure, that ever present fear that Wilbur will possibly go there.

Without spoiling too much, there’s also a tragic death scene, which is done with grace and sincerity, introducing young audiences to the topic of death with subdued care, never copping out or sugarcoating this complex dark subject. If you’re going to address death in a kids’ film, you can’t act like it’s easy to fix, because that’s not a tangible message for audiences, but you can give children the hope to overcome losing a loved one; this is where “Charlotte’s Web” excels.

The relationship between Fern and Wilbur is beautifully done too, we get so many scenes detailing her attachment to the piglet, making us feel for their eventual separation, especially when Fern is like a mother to poor Wilbur. I felt sad seeing them both saying goodbye to each other or when Fern wasn’t allowed to visit him at bedtime, but that made every reunion all the more lovely. 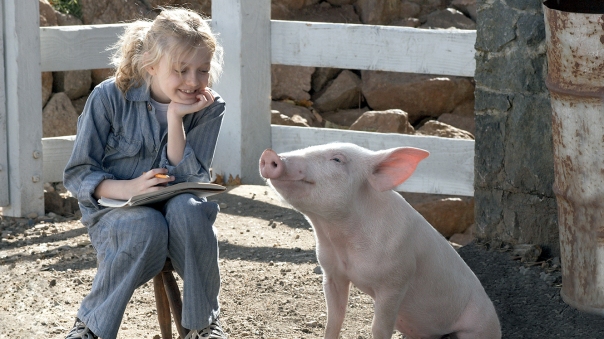 Wilbur is a great example of a child character written well, he’s easily excited and eager to play, but he’s also got a loving wholesome innocence that stole my heart. Unlike a lot of child characters, his youthful traits that we expect from kids are toned down, which I did appreciate. While children can be annoying, that’s not all there is to them, they can be more than that, and great films know where to draw the line for the sake of the audience’s tolerance levels.

The barnyard animals are mainly made up of one joke caricatures, like the sheep who are easily led or the cows that fart on cue, with most of them arguing or fighting very frequently, making it hard for me to enjoy their company or appreciate them as a community. 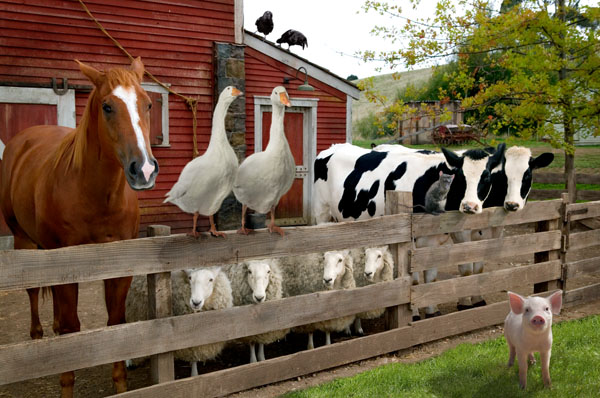 That being said, Templeton the rat is a strong character, being a wisecracking slime ball that plays a big part in story, as both hero and villain. Plus Charlotte, the title character herself, is this adorable arachnid with a soothing maternal kindness. The geese are okay too, even if they are doing the same back and fourth “I didn’t mean it like that” shtick, as they are the more sympathetic of Homer’s livestock.

But there are aspects of the film that did distract me, things that didn’t add up or served no point. For example, out of the blue, it’s revealed that Fern can talk to the barnyard animals and has closely bonded with them, even though we NEVER see this happening? She just suddenly admits that she can understand them, it’s really confusing, as if we skipped a bunch of scenes. 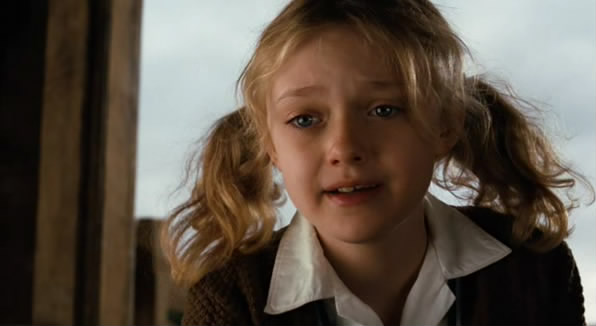 Fern’s mother also becomes strangely concerned by this, like it’s some kind of illness, as if kids never play make believe, even going to the doctor about it? The doctor doesn’t even have much medical advice to give, not really talking like a professional, but rather acting like some kind of whimsical guide for Fern’s mother, it’s really baffling.

Her mother seems really worried about her daughter being more attached to animals than humans, as well as her refusal to embrace her femininity, yet even though the doctor says it’s fine for Fern to be like this, the film pushes Fern to be the daughter that her mother desires her to be (mainly because she grows a crush on a boy), like her mother was in the right to judge her daughter like this? Weird conflicting ideals here. Why wasn’t this plot line about Fern’s mum learning to accept her daughter for who she is? So that her mum becomes more passionate about helping Wilbur?

There’s also a scene where Templeton goes to a garbage dump, to find inspiring words to best describe Wilbur, but his mission is challenged by two crows, both of which have had no purpose until this scene (they’ve mainly been milking the one joke about them being afraid of a scarecrow), deciding to randomly attack the rodent ” just because”. 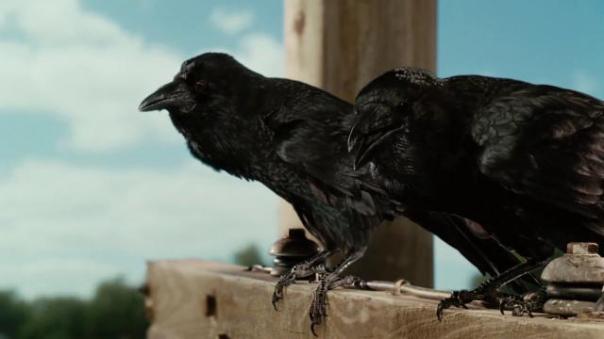 I know that the filmmakers wanted to add some tension to Templeton’s task, but this all just came off forced, with the antagonists’ weak motives and their lack of agency before this conflict. To be fair though, the scene’s ending does give the crows a reason to avenge themselves, providing them with a more solid reason to attack him again later.

Fern and her family also don’t exactly do much to convince Homer to not slaughter Wilbur too, relying on sneaky tactics and Charlotte’s miracles to do most of the work. Surely, Homer would realise that this pig is special to his niece? That killing it could create family tension or cause trauma for the little girl? It’s never really addressed, kind of brushed aside, even though it’s super obvious to everyone that killing Wilbur WILL have huge consequences on Fern. 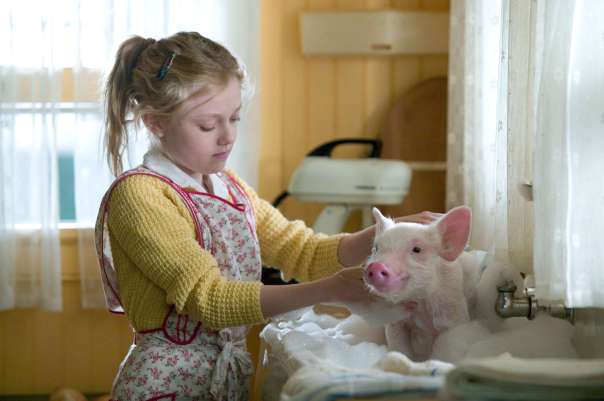 I understand that Charlotte is meant to be the star hero, proving her love to Wilbur as a friend, but could we have at least seen Fern and her parents TRYING to talk to Homer? Sat Homer down, explained Fern’s friendship with Wilbur, asking him to make an exception for the piglet? It’s not like Homer can’t just buy pork or ham from the store instead. Even if he declined, I would at least be content in knowing that they tried, because that would make me understand why everyone seems so helpless about it all.

No, everyone just accepts that Fern’s pet is going to be her uncle’s dinner in the festive season, refusing to do anything about it or even bring it up in conversation, it’s a really odd contrivance. I’m all for Charlotte putting her webbing to great use, that’s fantastic, but her efforts never seem like a desperate measure, because I was constantly aware that Fern and her family could be doing more.

Homer doesn’t even develop mercy for Wilbur through sympathy, but rather because the piglet’s fame results in success for his farm, meaning that he only appreciates Wilbur as a prize grabber or promotional gimmick, so I can’t even say that Homer saves Wilbur’s life out of his own compassion. 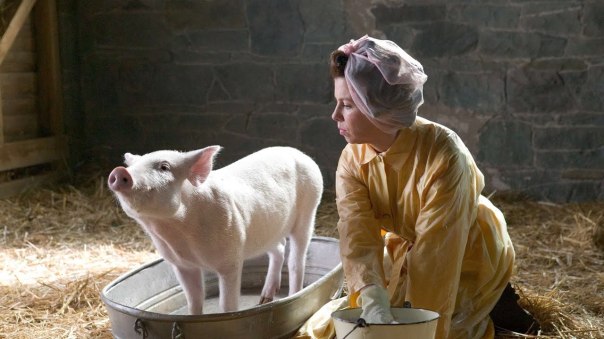 Charlotte’s Web’s strength comes from it’s central characters and their endearing relationships, as well as it’s responsible and tasteful handling of it’s darker elements, these are the things that make the film good.

There’s just too many head scratching details or unnecessary scenes, that stopped me from fully enjoying this film, because they distracted my engagement. I do wish that certain aspects were addressed or taken out, as you must remember that when making a film, you always have to be picky about what to explore and what to ignore.

Before anyone asks in the comments, I’ve not seen any of the animated adaptations of “Charlotte’s Web”, so I can’t comment on them or fairly compare them to this movie, sorry.

Posted on March 28, 2019, in Uncategorized. Bookmark the permalink. 1 Comment.